Personalized guided Moscow city tour in winter season with my dear client and professional photographer from Japan, Soichi Hayashi, that was held on January 25, 2018. Explored sights and attractions within 8 hours: Nikolskaya street, Red Square, Lenin’s Tomb (Necropolis at the Kremlin Wall), St. Basil’s Cathedral, Zaryadye Park, Bolshoy Moskvoretsky Bridge and Sofiyskaya Embankment, GUM (shopping mall), Moscow Metro, Old Arbat. I hope that you like it it has a nice sense of what it feels to do a winter shoot in Moscow. 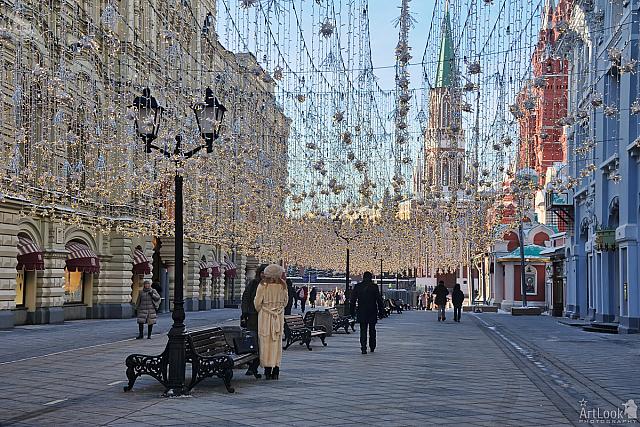 Photo #007: "Festive and Bright Nikolskaya Street" - Walking under festive garlands at the pedestrian Nikolskaya street on the way to the Red Square. 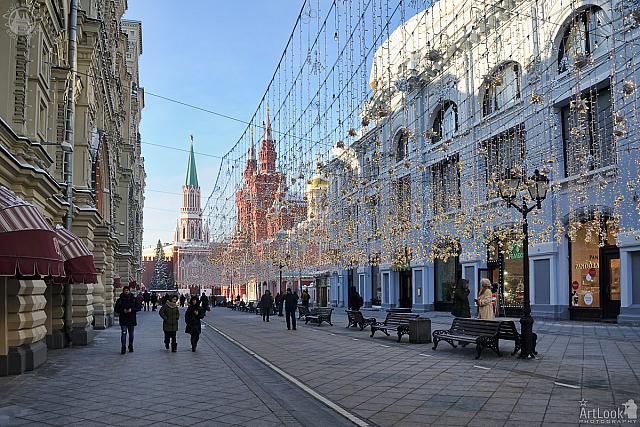 Photo #010: "Walking Under Garlands at Nikolskaya" - View from a corner of GUM building on Nikolskaya street decorated with a lot of garlands illuminating the festive pedestrian street even in daylight. 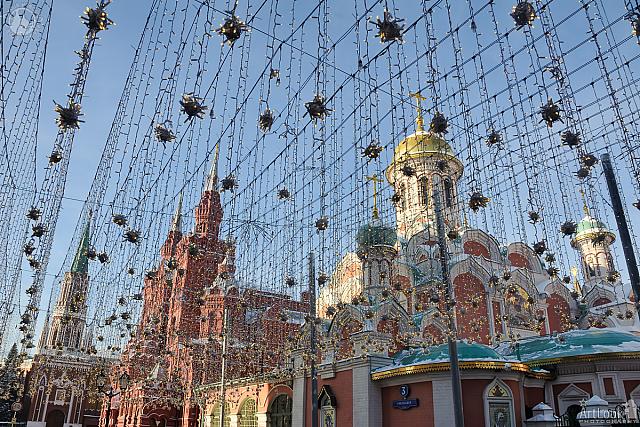 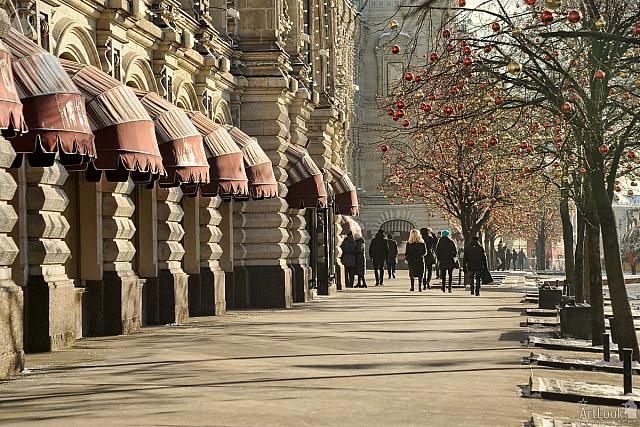 Photo #019: "Trees with Xmas Balls Along the GUM" - Walking along the GUM at the line of trees on the Red Square decorated with red and gold New Year balls for winter holidays. 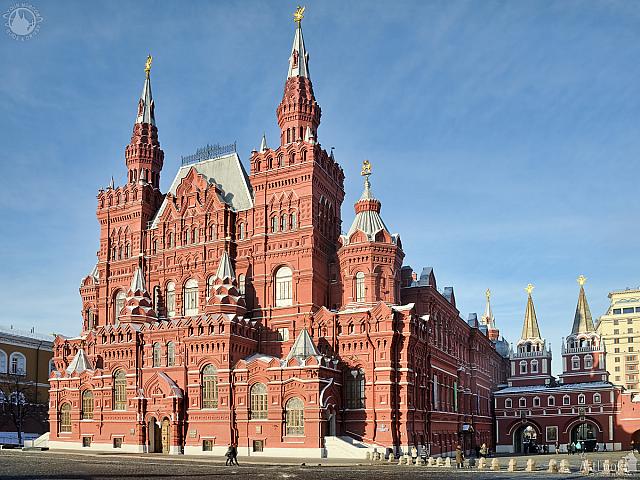 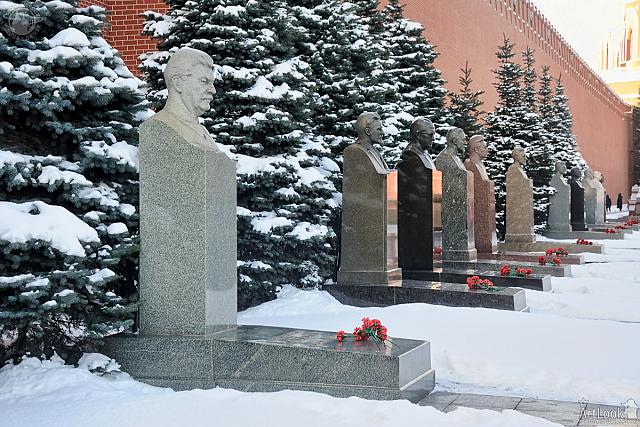 Photo #048: "Tombs of Stalin and Other Soviet Leaders Covered Snow" - The line of tombs of Soviet leaders (Stalin's tomb in foreground) and blue pine trees covered snow in winter season along the wall of Moscow Kremlin at VIP necropolis at the Red Square, behind Lenin’s Mausoleum. 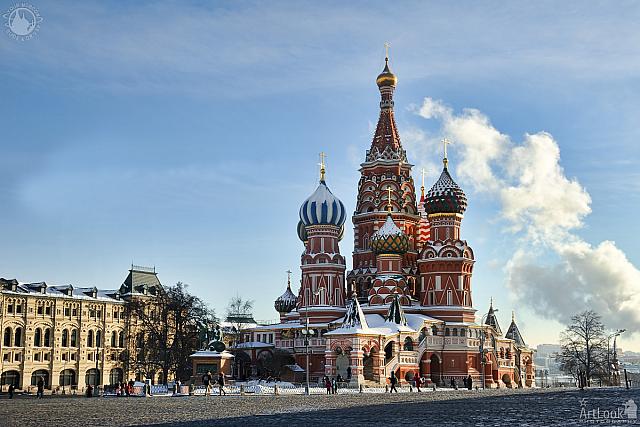 Photo #062: "St. Basil's Cathedral and Steam from the Central Power Plant" - View from VIP necropolis at Kremlin’s wall on the Red Square on the famous Moscow’s landmark, magnificent St. Basil’s Cathedral, framed with steam rising up from Central Power and Heating Plant #1. 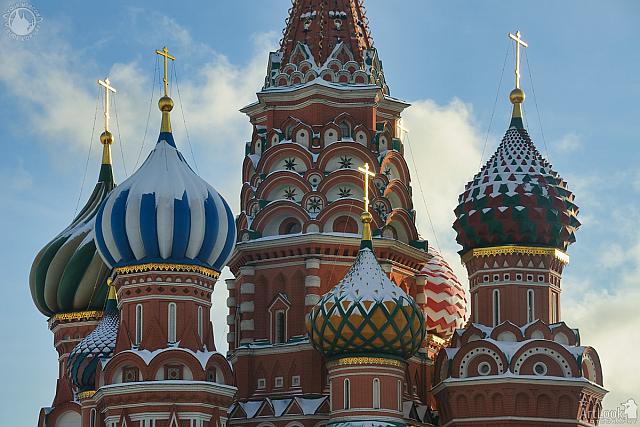 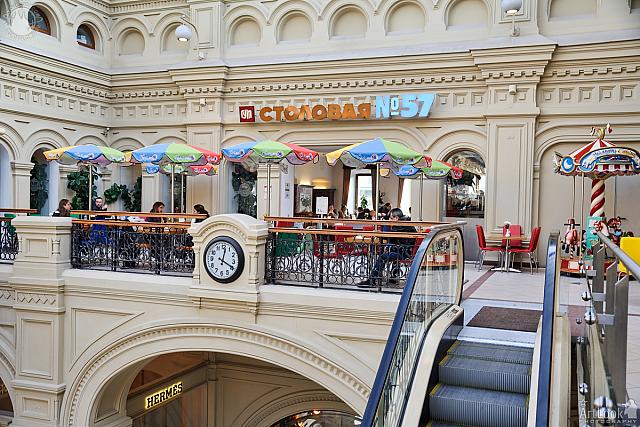 Photo #076: "Stolovaya No 57 in GUM" - View of the popular among locals and foreign tourists canteen “Stolovaya No 57” on the 3rd floor of GUM mall offering gastronomic journey and style of service back to the Soviet Union. 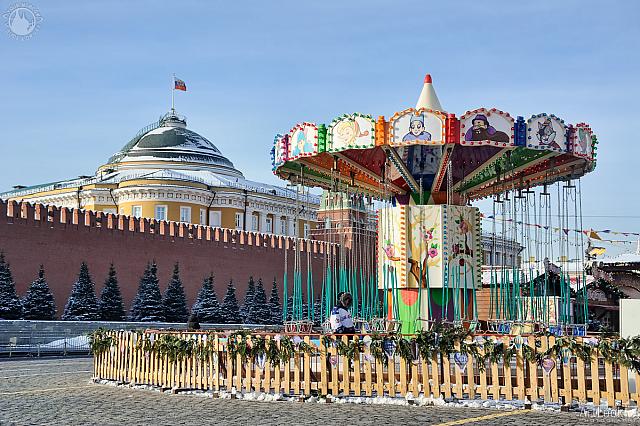 Photo #082: "Children's Carousel on the Red Square" - View of the colorful children's carousel at GUM fair on the Red Square in a background of the Kremlin's wall and Senate building with the flag of Russia hoisted at the top of its dome. 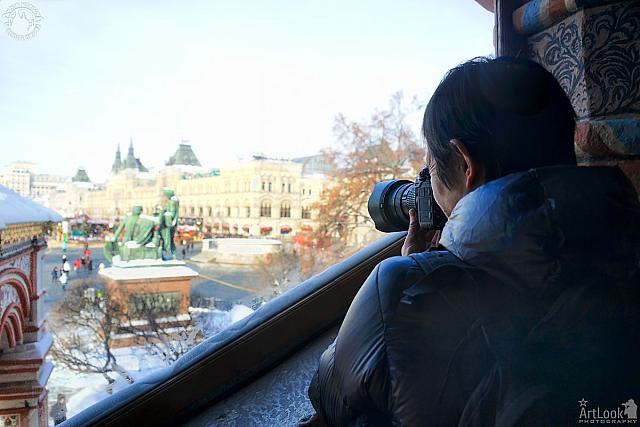 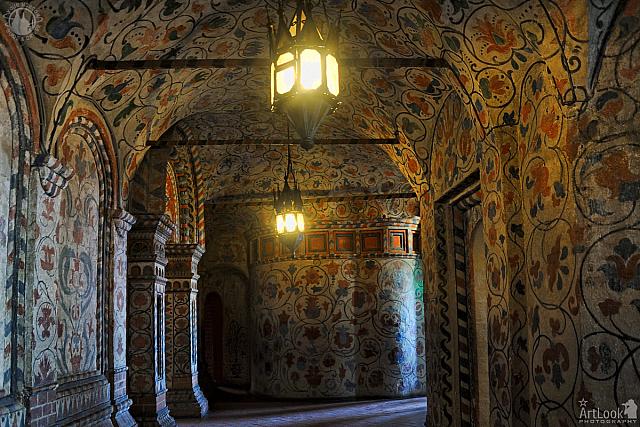 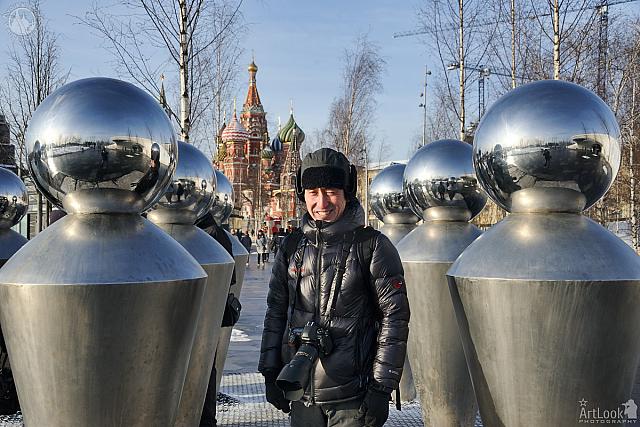 Photo #199: "Between Stainless Steel Figures in Park Zaryadye" - My dear client and photographer from Japan, Soichi Hayashi, during Moscow city tour between stainless steel figures in the new innovative park Zaryadye in the background of St. Basil’s Cathedral. 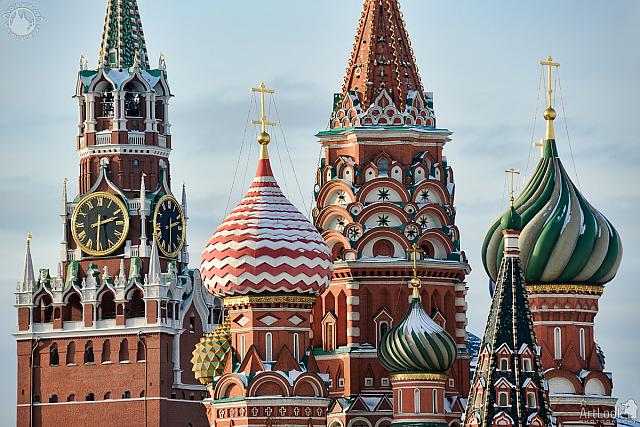 Photo #215: "Kremlin Chimes & Onion Domes of St. Basil’s in Winter" - View from park Zaryadye on the historic clock on the Spasskaya Tower of Moscow Kremlin and amazing onion domes with crosses of St. Basil’s Cathedral on Red Square covered snow in the winter season. 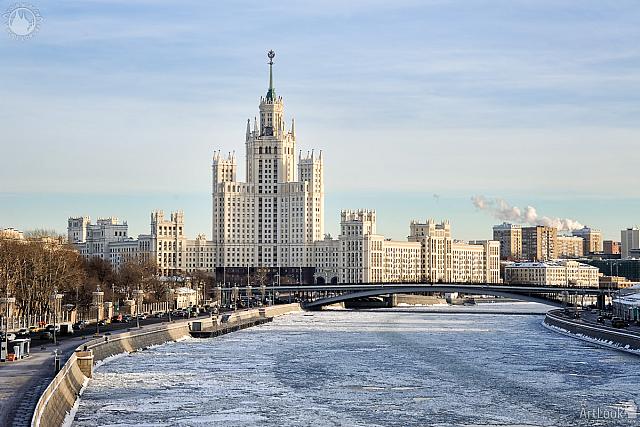 Photo #257: "Kotelnicheskaya Embankment Building and Frozen Moskva River" - View from the new floating bridge of park Zaryadye on the frozen river and Stalinist high-rise building in the winter season. 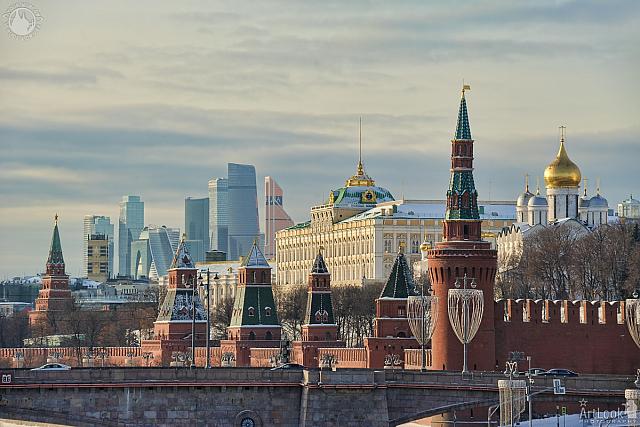 Photo #268: "Old Kremlin Against Modern Moskva-City in Winter" - View from the floating bridge of Zaryadye Park on the architectural ensemble of Moscow Kremlin, the 15th-century red brick walls and towers, 19th-century Grand Kremlin Palace, and 16th-century Church of Archangel Michael in contrast of modern skyscrapers of the Moscow International Business Center “Moskva-City”. 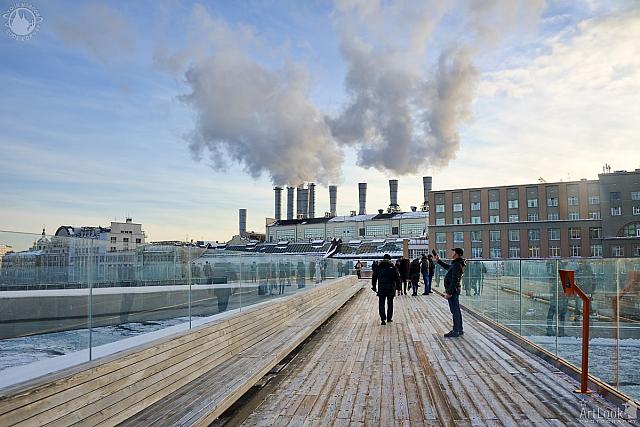 Photo #283: "Walking on the Hovering Bridge Over Moskva River" - People walk and take memory photos on hovering bridge over Moskva River in park Zaryadye. Steam rising up from chimneys of the oldest in Russia power plant #1 is on the background of the picture. 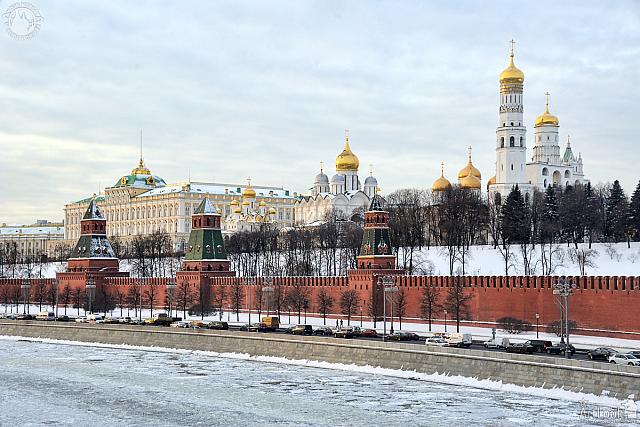 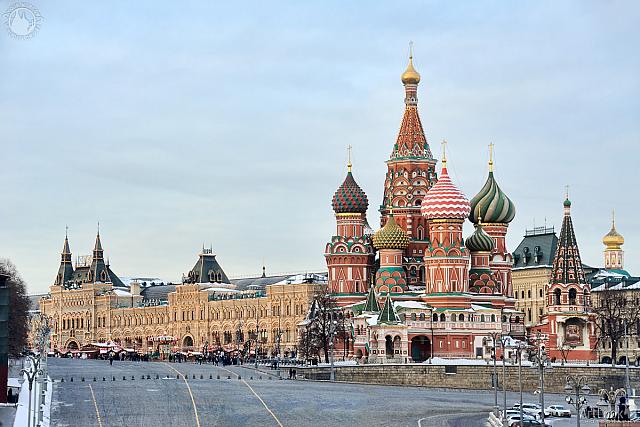 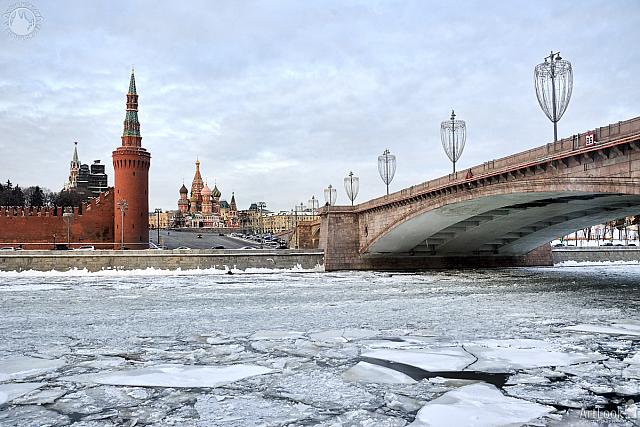 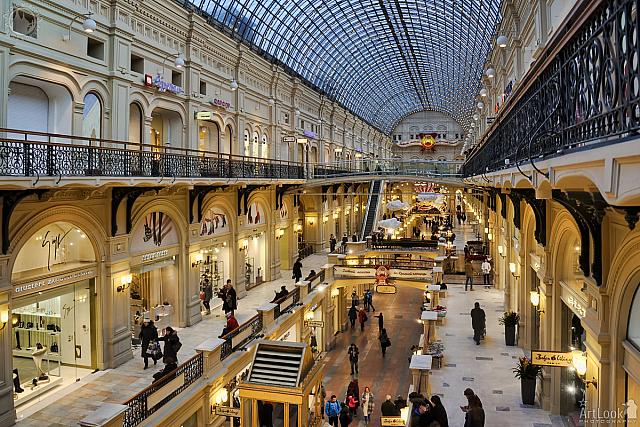 Photo #417: "Under the Glass Roof of GUM in Twilight" - View from escalator coming to the top 3rd floor on the magnificent interior of the GUM, the Main Universal Store of the country, covered with steel framework and glass roof by design of Russian engineer Shukhov, a similar style to the great 19th-century railway stations of London. 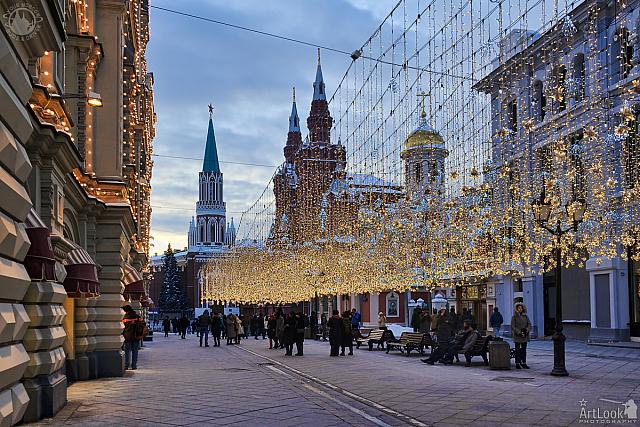