The useful guide to find locations of famous Russian and Soviet writers buried on Novodevichy cemetery with short backgrounds and pictures of the tombs and personal photographs.

Vasily Makarovich Shukshin was a Soviet/Russian actor, writer, screenwriter and movie director from the Altay region who specialized in rural themes.

Alexander Alexandrovich Fadeyev was a Soviet writer, one of the co-founders of the Union of Soviet Writers and its chairman from 1946 to 1954.

Nikolai Alexeevich Ostrovsky was a Soviet socialist realist writer, of Ukrainian origin. He is best known for his novel “How the Steel Was Tempered”.

Lev Kassil (1905–1970), writer, corresponding member of the Academy of Pedagogical Sciences of the USSR; 2 section 6 row. 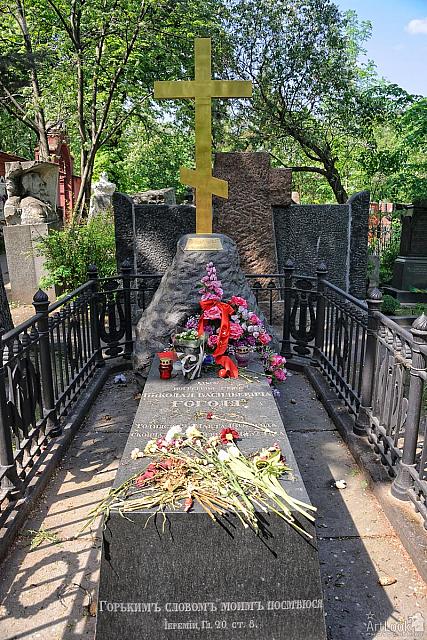 Nikolai Gogol (1809–1852), writer, reburied from the St. Daniel Monastery in 1931; The author of the fence and sarcophagus transferred from the Danilov Monastery N. Andreev, the author of the bust installed later, N. V. Tomsky (in December 2009, the grave was given an approximate “original appearance”, and the bust was temporarily transferred to the branch of the Historical Museum ); 2 section 12 row.

Nikolai Vasilievich Gogol was a Russian dramatist of Ukrainian origin. His novel “Dead souls” and short stories are considered the foundation of the great tradition of Russian critical realism and Russian satire. Among other notable works are comedies “The Inspector-General”, “Marriage”. Ten days before his death Gogol burned the second volume of his “Dead souls”. He hoped to close the gap between his spiritual and creative inspirations. Originally he was buruied at St. Daniel’s Monastery. He was reburied in 1931.

Sergei Aksakov (1791–1859), writer, critic, corresponding member of the Petersburg Academy of Sciences; reburied from the Simonov Monastery in 1930; 2 section 13 row.

Sergey Timofeyevich Aksakov was a 19th-century Russian literary figure remembered for his semi-autobiographical tales of family life, as well as his books on hunting and fishing.

Anton Pavlovich Chekhov was a Russian playwright and short-story writer, who is considered to be among the greatest writers of short fiction in history. His career as a playwright produced four classics, and his best short stories are held in high esteem by writers and critics. Along with Henrik Ibsen and August Strindberg, Chekhov is often referred to as one of the three seminal figures in the birth of early modernism in the theatre. Chekhov practiced as a medical doctor throughout most of his literary career: "Medicine is my lawful wife", he once said, "and literature is my mistress."

Mikhail Afanasyevich Bulgakov was a Russian writer, medical doctor and playwright active in the first half of the 20th century. He is best known for his novel The Master and Margarita, published posthumously, which has been called one of the masterpieces of the 20th century.

Ilya Ilf, pseudonym of Iehiel-Leyb Arnoldovich Faynzilberg, , was a popular Soviet journalist and writer of Jewish origin who usually worked in collaboration with Yevgeni Petrov during the 1920s and 1930s. Their duo was known simply as Ilf and Petrov. Together they published two popular comedy novels The Twelve Chairs (1928) and The Little Golden Calf (1931), as well as a satirical book One-storied America that documented their journey through the United States between 1935 and 1936.

Aleksey Nikolayevich Tolstoy, nicknamed the Comrade Count, was a Russian and Soviet writer who wrote in many genres but specialized in science fiction and in historical novels.

Samuil Yakovlevich Marshak was a Russian Jewish and Soviet writer, translator and children's poet. He translated the sonnets and some other of the works of William Shakespeare, English poetry, and poetry from other languages. Maxim Gorky proclaimed Marshak to be "the founder of Russia's (Soviet) children's literature." 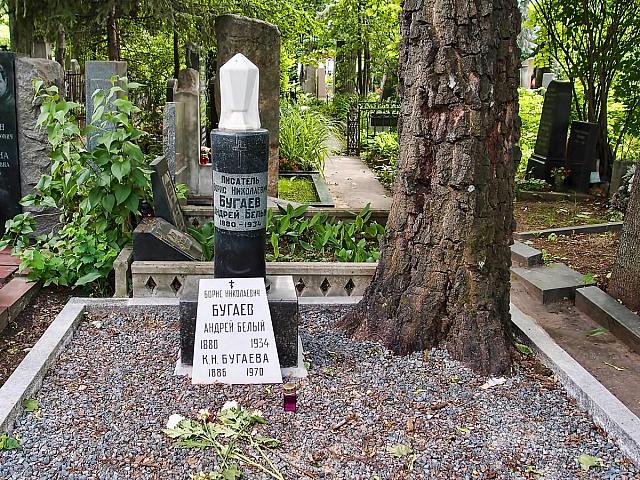 Andrei Bely (1880–1934), writer, poet, symbolist; on the territory of the monastery, behind the Smolensky Cathedral, the father of the poet N. V. Bugaev was buried; 3 section, crossing 60 and 38 rows.

Boris Nikolaevich Bugaev, better known by the pen name Andrei Bely or Biely, was a Russian novelist, poet, theorist, communist, and literary critic. His novel Petersburg was regarded by Vladimir Nabokov as one of the four greatest novels of the 20th century. One of the most outstanding figures of Russian symbolism, Andrey Bely was truly representative of his own epoch, embodying it in his life and art. He was born in 1880 in Moscow in the noble intellectual family of a prominent mathematician and a social beauty.

Valery Yakovlevich Bryusov was a Russian poet, prose writer, dramatist, translator, critic and historian. He was one of the principal members of the Russian Symbolist movement.

Nikolay Platonovich Ogarev was a Russian poet, historian and political activist. He was deeply critical of the limitations of the Emancipation reform of 1861 claiming that the serfs were not free but had simply exchanged one form of serfdom for another.

Ilya Ehrenburg (1891–1967), writer, poet, publicist; the author of the monument I. L. Slonim from the drawing by Pablo Picasso; 7 section right side 1 row.

Boris Nikolaevich Polevoy was a notable Soviet writer. He is the author of the book Story of a Real Man about a Soviet World War II fighter pilot Alexei Petrovich Maresiev.

Valentin Petrovich Kataev was a Russian and Soviet novelist and playwright who managed to create penetrating works discussing post-revolutionary social conditions without running afoul of the demands of official Soviet style. Kataev is credited with suggesting the idea for The Twelve Chairs to his brother Yevgeni Petrov and Ilya Ilf. In return, Kataev insisted that the novel be dedicated to him, in all editions and translations. Kataev's relentless imagination, sensitivity, and originality made him one of the most distinguished Soviet writers.

Best Attractions You Must See in Moscow

The ultimate guide to driving safely and avoiding distractions