Side View of Intercession Church at Fili from Promenade Gallery 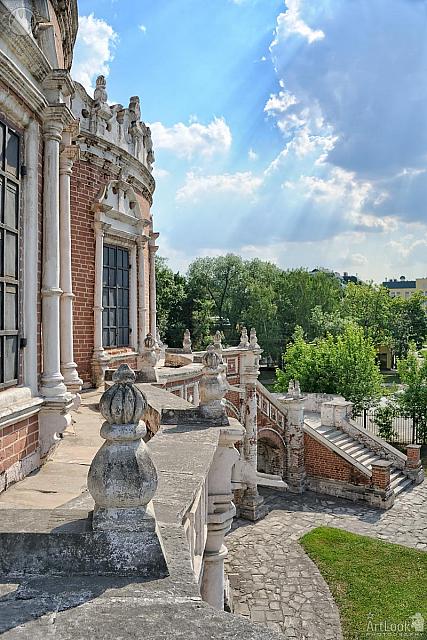 «Side View of Intercession Church at Fili from Promenade Gallery»

Exterior view of Cathedral of Intercession of the Virgin at Fili from a promenade gallery located on a high podklet (basement in Eastern Orthodox churches). It is the Northern side of the upper church of Veronica's Veil (Church of the icon of the Savior Not Made by Hands) with the view on the western porch with steps. Sunbeams through the clouds highlight the church like a blessing from God.

The church was constructed between 1689 and 1694 in the shape of a Greek cross in the style of Naryshkin Baroque (well-known as “Muscovite Baroque”). The type of architectural style called by the family name of Lev Naryshkin who ordered many churches in this style. The Church of the Intercession of the Virgin in Fili can be referred to a classical monument of that style.