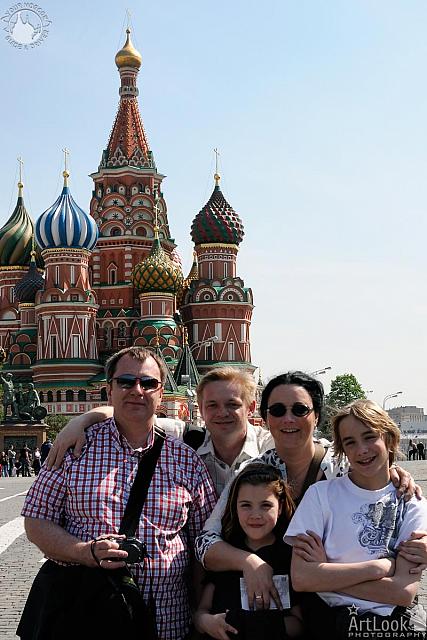 «Picture with Dworaks on the Red Square» - See photo in Gallery

Note: Beginning of the story you can read here: "A case with wrong parking (Part I)".

… On May 4th about 5 PM, after seeing off my Austrian clients, Rupert, Alexandra, Victor and Jana, at Domodedovo airport, I was able to quickly get a ticket and catch the "AeroExpress" train which goes to  Paveletsky railway station in the center of Moscow within 45 minutes. On the way to Moscow I was very upset about the situation with my car which caused unexpected trouble for my clients and ruined their happy mood at the end of their Moscow adventure. It was the first time in my life when my car was towed and impounded to a special parking "jail" by traffic police. It would not have been as bad if my client's luggage was not inside the trunk of my car and/or we had a bit more time to drive to the place where my car was moved to in order to get their bags.  What a coincidence! I remembered the words of my clients when they tried to calm me down: "Don't worry Arthur, this is part of our Moscow adventure and even if this luggage is lost we can buy a new one".  Of course, their statement and positive attitude in spite of the bad circumstances made me more determined to solve this problem within the next 30 hours.

When I arrived at the Paveletsky railway station and went into a metro station I was waiting in line about 20 minutes to buy a ticket and for the first time smiled at how one smart Russian entrepreneur (maybe more correctly to call him a speculator) was reselling tickets for 1,5 times the price to people who didn't want to wait so long and be pushed by others in line.  I can say it was quite a mess, but this is normal for the big railway stations in Moscow with so many newly arrived people who do not have electronic tickets for multiple rides.  I arrived at the Petshatniky (South-East of Moscow) metro station about 7 PM and after an unsuccessful attempt to find a shuttle bus which goes to the traffic police department I took a taxi for about $10.  The place was a bit further beyond Nikolo-Perervinsky Monastery and I was pleased to see again the majestic cathedral of Our Lady of Iberia which gave me some encouragement and improved a bit my mood on the way to the traffic police station.

When we arrived, my driver showed me where I have to go.  After checking how many people were inside the long metal "container" with many windows he told me that it will take a long time and so he left.  Yes, it was not even a building--the construction reminded me of a temporary accommodation for construction workers: it was square, made of metal and had a lot of small windows… I was standing in line there about 1,5 hours, all that time breathing the stench filled air which covered all of this industrial area.  Somebody in the line told me that nearby is located one of the biggest sewage aeration plants in Moscow-- "Gurijanovskaya”.  Finally, I got the papers and paid the fine in a terminal located inside. When I finally left  I was very exhausted, had a terrible headache caused by the bad air and was starving.  I met a young man, a student, who had a Volkswagen and offered to drive me to the place where my car was impounded. I was very tired and it was already quite late, about 8:30 pm and the two places were located in different sides of the city quite far from metro stations, so I decided to accept his offer and paid him about 1000 rubles (about $43). On our way after calling my wife Olga and telling her the current news, I told the student  who works there as a private taxi driver in the evening after classes (good place by the way, I believe that it is not a problem to find clients there :-)) my story and he was very impressed and wished me good luck in the future… When we arrived at the west side of Moscow where my car was "imprisoned" I received a phone call from Austria and Rupert informed me that they had already arrived in Vienna safe and sound and currently were on the way home from the airport.  From my side I was happy to inform him that I am currently getting my car with their bags and everything will be OK, no worries. We arranged to contact each other the next day to exchange  any new information about the possibility of delivering their luggage to Vienna.  After checking my car for any damage I signed some papers and drove away from this terrible place. That evening I arrived home about 11:00 pm and felt as if I had returned from several days of hard work.

In the third part of this story you will learn how I solved the problem of sending their luggage to Vienna, Austria...

With BEST Regards,
Your Personal Guide & Driver in Moscow

A Case with Wrong Parking (Part I)