Ice Rink at Cathedral of Christ the Savior 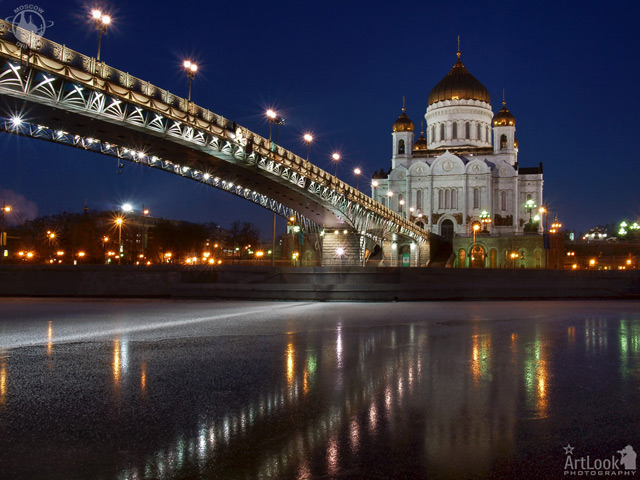 «Cathedral of Christ the Savior and frozen Moscow River» - See photo in Gallery
On the first days of 2008 the temperature of air in Moscow lowered down to -16..-18 C (+3…0 F), but was not snow on the grounds yet. This picture of Cathedral of Christ the Savior with view of frozen Moscow River (Moskva-Reka) that looks as like ice rink I took very early morning after seeing off my current client from USA to airport. It was soo cold that after operating my camera about ten minutes, my hands and feet almost freeze, but I was awarded several great pictures and one of them in front of you.

On this picture, the Patriarchy Bridge over the icy Moscow River was built in old style in August 2004 and presently spans the Moscow River between the majestic Cathedral of Christ the Savior and Bersenevskaya Naberezhnaya. The beautiful bridge built by the architect Posokhin, artist Zurab Tsereteli and Engineers A. Kolchin and O. Chemerinsky perfectly fits to the architectural ensemble of Cathedral of Christ the Savior.

The artistic decoration of the Bridge was provided by Russian Academy of Arts Professional Artistic Centre of Zurab Tsereteli and it is geometrically tied to the famous cathedral. The nicely made illumination, beautiful old style architecture and excellent location for viewing Moscow Kremlin, monument of Peter The Great and, of course, cathedral of Christ the Savior attract a lot of tourists at day or night time.

The Cathedral of Christ the Savior is a great monument to Russian military glory and superb example of Russian architecture. It was opened in 1883, in a memory of Russian victory over Napoleon in 1812. This Cathedral had been under construction for about 40 years (1839-1883), but it was destroyed in one day, in December 5th, 1931 - during the Stalin's time, because communists decided to build "Soviet Palace" for their meetings. The cathedral was rebuilt in 1995 - 2000.

A Letter with Season Greetings from Canada