Ice Replica of Moscow City in Miniature on Poklonnaya Hill

During the winter holidays from December 30, 2015, through January 13, 2016, the exciting exhibition project “Icy Moscow: In the Family Circle” attracted thousands and thousands of citizens and visitors of all ages, from the very young to the very old, to Victory Park on Poklonnaya Hill in the capital of Russia to watch artists carve miniature copies of Moscow’s major attractions out of ice. 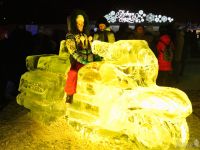 The exhibit included replicas of the Moscow Kremlin, the Bolshoi Theatre, the main building of Moscow State University, the monument to Yuri Dolgoruky, Moscow City Hall, and other famous attractions of the capital. “Icy Moscow” also provided entertainment for children: an educational maze-Metro, a game called "The Capture of Snow Town," an icy hill, and small cars to ride on through the miniature city.

In the evening, the lights were lit, creating shimmering rainbow colors on the ice to enhance the festive New Year atmosphere. In addition, every day at 16:00, 18:00 and 20:00, visitors could enjoy an ice show featuring 42 Ded Morozes (Russian Santa Clauses), representing people of different nationalities living in Moscow.

More than 200 tons of fresh ice were initially brought into the park for the exhibition. Because of the unusually warm December weather, an additional 800 tons of pure Siberian ice were required for the construction of Moscow in miniature.

"Icy Moscow" is open daily from 12:00 to 22:00 until January 13. Tickets are 300 rubles for adults and 250 rubles for children ages seven and up. Children younger than seven are free. Tickets can be purchased at the box office at the entrance to the park.