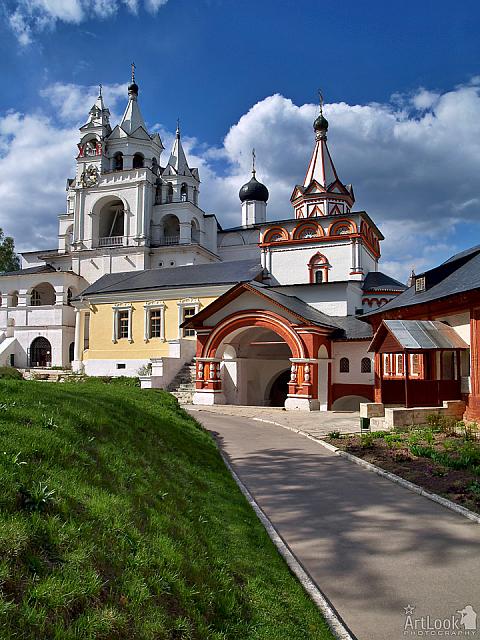 Zvenigorod - A Perl of Rissia

Zvenigorod is a beautiful little town situated some 60 km west of Moscow. Its name itself (ringing city) implies the chiming of church bells. No wonder the Zvenigorod coat-of-arms displays a bell, the town’s symbol. A 35-tonne giant, Bolshoi Blagovest (Great Annunciation), cast by the distinguished foundry master Alexandr Grigoryev, enhanced the beauty of the Savva Monastery’s bell-tower until the year 1941. It had no equal in beauty and melodiousness.

Everything here disposes to rest, privacy and meditation: quiet side-streets, wooden houses submerged in orchards, cristal-clear waters of the Moskva River (Moscow River), the air infused with grass and conifer. Indeed, one seems tempted to drink this air, for it is “light, invigorating, delicious and ringing“. The place is populated by affable and open-hearted people whom a geographer described way back two centuries ago as being healthy, “ruddy-cheeked”, as well as “adroit, courteous and smart“.

“It’s really good in Zvenigorod where I worked in hospital some time ago“, reminisced Anton Chekhov who planned to get married in a Zvenigorod church. And, as though echoing him, the celebrated compozer Sergey Taneyev wrote as follows about this locality to his friend in a European spa: “It’s nice indeed in your Baden-Baden, but things in our Dyutkovo are just as not bad. There are hills and they are covered with woods and meadows. Strolls are splendid here“.

Zvenigorod’s nature was a source of inspiration for whole generations of artists, musicians, writers and poets. It nourished the genius of young Pushkin, nurtured the creative work of Petr Tchaikovsky. Ilya Levitan, Anton Chekhov, Mikhail Prishvin, to mention but a few.

Enchanted by this nature, Tchaikovsky wrote: “The more I see this truly picturesque locality abundant in forests, the more I revel in it“.

Gorodok — The old Kremlin of Zvenigorod

Let’s go uphill and visit Gorodok — the heart of the old town, its kremlin. Time seems to stay still here. An ancient temple, mighty ramparts, age-old pine-trees, springs — everything here remains today as it was in the Moscow Kremlin six centuries ago.

Zvenigorod that in olden days experienced the burden and glory of an appanage principality’s capital, still preserves the oldest on Moscow land white-stoned cathedrals of the Assumption (1396-1399) and the Nativity (1406) adorned with the precious frescoes of Reverend Andrei Rublev. Presently, the Tretyakov Art Galery keeps the Zvenigorod Deesis tier created by the great icon-painter. It comprises his icons “The Saviour“, “The Apostle Paul“, “The Archangel Michael“. They enchant one by a „rare combination of elegance and strength, softness and firmness, and — above all — by their boundless goodness“.

The harmony of the worldly and the heavenly, purity and clarity — such are distinguishing features of the monuments of the Savvino-Storozhevsky Monastery founded in 1339 by Savva, a disciple of St. Sergius. Unlike any other architectural ensemble, perhaps, it still retains not only the enviable originality of its image but also our ancestors’ concept of the harmonious unity of man and nature. “Like the heavenly paradise, this place is planted all over with fragrant flowers41. These words contained in St. Savva’s life story echo with an enthusiastic testimonial of the famous historian Nikolai Karamzin: “Nowheve else have I seen such a wealth of plants: flowers, grasses and trees are imbued with special strength and freshness. Lime- and oak-trees are marvelous. The road thence to Moscow is most eye-pleasing, hilly and marvelous sights around!“

Over the ages the Savvino-Storozhevsky Monastery had been renowned as a spiritual center. Known in ancient times as the house “of Our Lady on the Storozhakh“, the Savvino-Storozhevsky Monastery had become — since the times of Aleksey Mikhailovich — the place of royal pilgrimage and a favorite residence of the Romanov dynasty tsars. Since 1920, this architectural ensemble housed the Zvenigorod Museum of History, Architecture and Fine Arts.

The gold-domed Cathedral of the Nativity, with the murals of the 15th, 17th and 20th centuries and resumed liturgical services, the truly unique buildings dating to the middle of the 17th century with the recreated ancient Russian interiors of Boyars’ chambers and the Tsarina’s home church, the enormous refectory, the Blessed Entry group, the majestic belfry retaining the memory of one of the world’s best chimes, the fortress wall with six towers — each of these masterpieces of ancient Russian architecture leaves an indelible impression.

The museum displays over ten expositions and exhibitions: icons of the royal icon-painters of the 17 th century and ancient Russian books, a unique collection of chinaware and giant Chinese vases, articles of everyday life in Old Russia, Russian and foreign paintings and drawings, remarkable pieces of furniture and fabrics. Also, there are wares of local craftsmen — wicker-work of willow and rod, folk costumes, wares of turnery and other folk trades.

A truly breathtaking view unfolds from the 20-metres high belfry. The panorama is both beautiful and majestic: the Moskva River valley, the Vvedenskoe estate — one of numerous estates in Zvenigorod and, perhaps, the most harmonious one referred to by contemporaries as “the most typical and splendid mirrors of the century and Russian everyday life“. One can also see the middle Russian village of Savvinovskaya Sloboda familiar due to canvasses by Ilya Levitan and Nikolai Krymov, the ancient town with a cross shining over the Cathedral of the Assumption. Here one can’t but recall words by Feodor Chaliapin: “The other day I was in Zvenigorod, went to St. Savva’s Monastery, attended the Christ matins and for two days climbed to the bell-tower and rang all the bells. Had a glorious rest and received a great pleasure”.

Come to Zvenigorod and you will see a real pearl of Russia!

The Zvenigorod Museum of History, Architecture and Fine Arts is open from 10 a. m. to 5 p. m., except Mondays.