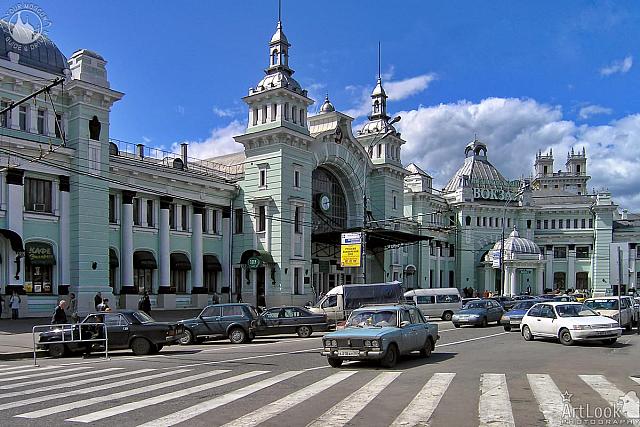 The picture of a Lada car at Belorussky railway station I took quite long time ago (in May 2004) and now I think that it can perfectly fit to finish my recent story about the case with wrong parking that I started to tell you several days ago. You can read the first and second part of this story here:

...A short time later, after seeing my wife off to her work at the hospital very early in the morning  (7 am) and while it was still night in Austria, I went downtown to take some interesting photos during the last repetition of Victory Parade on the Red Square I met on Tverskaya street one photographer from Minsk (capital of Belorussia) and one from St. Petersburg and during the parade was able to relax a little bit from the current problem. I returned back to my home about noon and received a phone call from Alexandra and she informed me that she called the airlines and was told it would be almost impossible to fly their luggage to Austria without a passenger. I excepted this information and  called DHL where they quoted the price to deliver the 40 kilos of luggage to Vienna for about $900.  In addition, I had to prepare an inventory list to declare every item in their luggage for customs. It was a crazy price, but I was not worried about it.  The most undesirable thing was that I had to open all of my client's bags to make this inventory.  I hope you understand how hard it was for me to rummage though somebody else's things… At the same time I called the Sheraton hotel where my clients stayed for 2,5 days in hopes to find any information about how a hotel could handle the problem if they had to send lost luggage of their clients abroad. The answer was that they don't provide these services and advised to send it via DHL or Russian Post (I knew these answers, of course, to send via Russian Post could be cheaper, but it can take quite a long time to deliver, maybe 2 weeks or maybe a month and also I had to declare every item for customs).. After speaking with the staff of the Sheraton Palace hotel, I got a great idea:  I remembered our old, very common and well-known way of sending parcels, papers or any luggage via railway using the services of the conductor of a carriage of the train which goes to the place where you need to send something.  When I called the railway station for information about such services, they suggested I talk privately with the conductor...

So, with this in mind, I was lucky to discover that there is a railway connection between Moscow and Vienna and fortunately for me a train to Austria departed on this very evening.  Even though it was a long shot, I decided to take the bags and come 1 hour before the departure of the train to talk with somebody there.  Thinking in advance that it can be very hard to  believe a stranger with such an incredible story about the luggage I prepared copies of my passport, my enterprise documents, tax payments and correspondence with my clients that I work with as a guide and driver to convince them I am not a criminal.  These papers helped me a lot I think. After explaining my story to one conductor, who trusted me and agreed to help me, I was very happy then he told me that he will try to make everything possible even though the luggage of my clients will be stopped at the border between Belorussia and Poland. I assured him several times that everything was up front and honest understanding that these kind men took a lot of responsibility accepting my request.

What I can say at the end of my story… I was very lucky at the end and I am very happy now to inform you that after a couple of days like a nightmare I made it and in 2.5 days Rupert was able to his luggage in Vienna. We talked as he was just entering into his home with the bags and told me that everything is OK and the Dworaks were happy to receive their luggage so fast :-). I told him several times not to send me any money for the cost of this delivery because it was my mistake and NOT their fault.  Why should they have these expenses?  It was a very painful lesson for me, but it was my mistake so I have to pay for it and I am sure that I will not let it happen in the future.  When we spoke the last time after he had successfully received  his luggage, Rupert told me that this money is nothing for him and his family in comparison with how they liked me, my services and Moscow, even though it was some trouble at the end, and he is going to cover some of my expenses anyway…

With BEST Regards,
Your Private Guide & Driver in Moscow

«My Moscow» - See photo in Gallery
My Moscow