The Skolkovo Innovation Center is located in the Mozhaysky district of the Western Administrative District of Moscow of an area of approximately 400 hectares. It is a modern scientific and technological innovative complex operating in Moscow, where new technologies are monetized. The Innovation Center is the first science city built after the collapse of the USSR, besides it is the city microdistrict of Moscow. There are not only startups, but also the most advanced large businesses tend to get here such as Sibur, TMK, Sberbank, or Boeing. 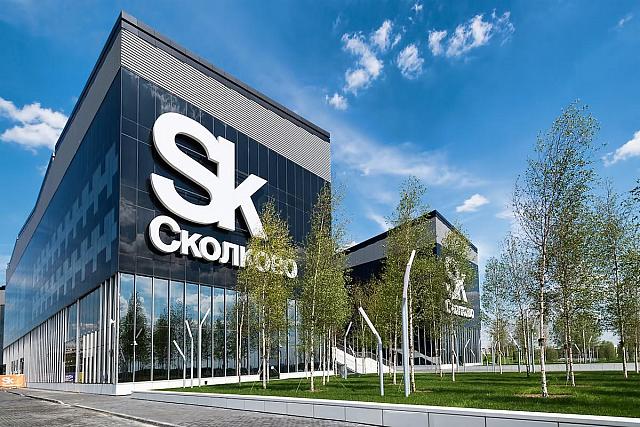 The complex provides special economic conditions for companies operating in such sectors of the Russian economy as telecommunications, space, biomedical technology, energy efficiency, information technologies, and nuclear technologies. The most striking example is the cars of the Belka car-sharing service, which each of you saw on the roads of Moscow, they were developed in Skolkovo.

Skolkovo budget financing, until the completion of the project in 2020, should amount to 125,2 billion rubles.

Ten years ago, the Skolkovo Foundation was conceived as a set of institutions that will form the environment for the emergence and development of innovative companies. That is, the main task is to create an environment in which entrepreneurs can effectively realize their ideas. Today it is an ecosystem with a full-fledged urban infrastructure - residential buildings, an international gymnasium, a university, a technology park and a significant number of scientific and technical centers of large corporations. Inside the ecosystem, there are more than 150 investing companies, hundreds of industrial partners, as well as more than 2,000 startups.

During its existence, the Foundation has issued more than 3,500 grants totaling 15 billion rubles. The largest amount of financial assistance was received by projects in the field of biological and medical technologies: their share in the Skolkovo portfolio is 33%.

The Skolkovo ecosystem includes the Skolkovo Institute of Science and Technology (Skoltech for short), which was created with the participation of one of the most successful technological universities in the world - the Massachusetts Institute of Technology (MIT). Skoltech prepares researchers and entrepreneurs, and in the educational process focuses on innovative and business practices. Education at Skoltech is a preparation for work in a rapidly changing scientific and technological landscape.

The Skolkovo eco-system also includes the largest Technopark (technology park) in Eastern Europe - the building most famous among visitors to the Innovation Center. Its area exceeds 96 thousand square meters, and this is almost 14 football fields.

The main task of the Technopark is to unite residents from different fields (in «Skolkovo» believe in the multidisciplinary approach to business construction - when representatives of different areas meet and come up with something new, nothing like anything revolutionary) and provide them with all the necessary services for the development of technology. This is where the forum «Open Innovations» takes place, and the offices of more than 250 residents, laboratories and community centers are located.

Skolkovo is much more than a science city or a technology park. As conceived by its creators, it consists of four districts – Yuzhny (South), Technopark, University and Severny (North), each of which is self-sufficient in terms of a comfortable urban environment. And at the same time, together with the Central Zone and the Landscaping Zone, they make up a single ensemble, combined by a common infrastructure and urban planning concept developed by the French company AREP. It is based on the idea of Urbanvillages - a low-rise settlement with a low building density, in which housing is within walking distance from work and recreation areas, while the space is used almost around the clock. Four- and five-story Tetris houses have already been built (in shape they really resemble figures from the popular game), townhouses and cottages. There are a few apartments and houses available.

Soon they will start to build the residential complex "Bublik" (Eng: Bagel): it is designed in the shape of a circle and really looks like a bagel. All Skolkovo houses have two features. Only residents and employees can live in them, and not anyone. You can’t buy an apartment or a house, you can only rent it. 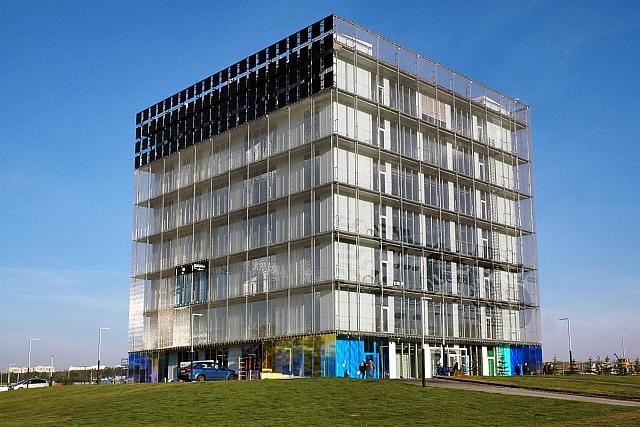 Business Center "Hypercube" - the first building on the Skolkovo Innovation Center territory. It is a transformer building with an interactive facade, scavengers and a drone laboratory, built on the former greenhouses of the Zarechye state farm. There is an observation platform on its roof from which a beautiful view of the surroundings is opened.

Skolkovo “Hypercube” is a seven-story building of cubic shape, on the concrete walls of which an outer frame is mounted, which allows changing facade structures to more modern ones if required. Now, most of the external space is occupied by a media facade made from a stainless-steel mesh. Information (such as news) and images are projected onto it.

Solar panels are installed on the roof and upper floors of «Hypercube», which help to generate energy for power supply of lighting devices in technical rooms. The Parans system's light traps turn after the sun and deliver sunlight through the optical fiber to the middle of the building. 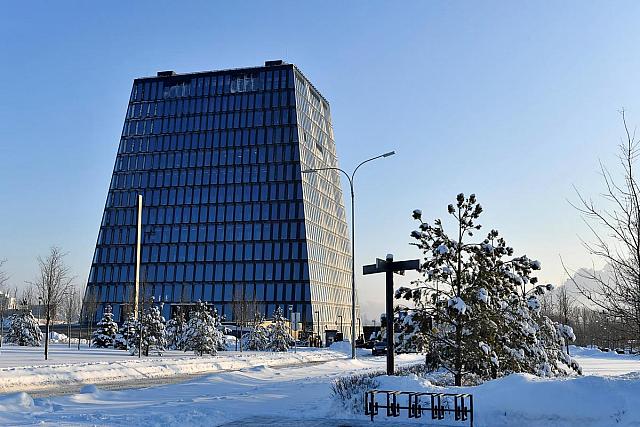 Matrex Business Center, aka Matryoshka, as it is called in Skolkovo. The high-rise business center of glass and concrete is a visiting card and center of attraction in the innovation center. And they call it “Matryoshka” because the internal geometric core of the building is made in the form of the Russian doll.

This is unique in complexity architectural object, built in the shape of a truncated pyramid, designed by Boris Bernasconi Bureau.

The project of the multifunctional public building used large-sized aluminum doors with glazing by ALR Glazing. The uniqueness of the Hörmann solution for this project is that the plane of the opening, as well as the plane of the door leaf with guides, has the same angle of inclination.

In the center of the building is an atrium shaped like a Russian nesting doll (matryoshka), with transformable stalls, a balcony, and lodges. Above the hall is a spiral ramp, which is the exposition space of the Innovation Museum. At higher levels, along the walls of the building are offices for residents of innovative companies. There is also an official residence, a fitness center with a swimming pool, and a restaurant with a viewing platform.

The city-forming elements of Skolkovo can be considered the University and the Technopark. Numerous office and laboratory buildings, apartment buildings and cottages, sports centers and shops are being erected next to them. According to the project of the new General Plan of the Innovation Center, in total about 17 thousand people will live on the territory of Skolkovo, and more than 80 thousand will work.