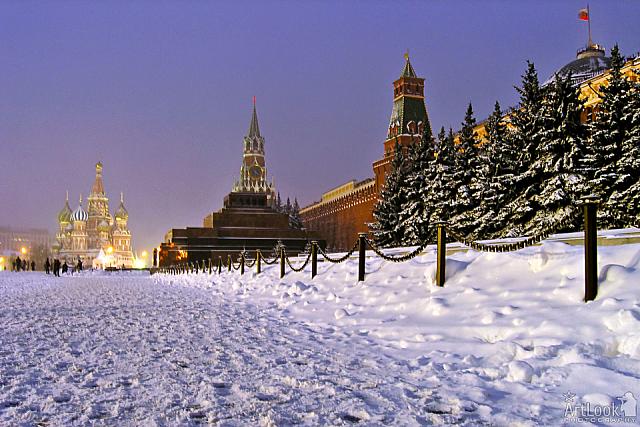 «The Finest Square Before Christmas» - See photo in Gallery
This picture I took on the Red Square without tripod - just stopping my brief :). I like this view and really want to devote this photo to the New Year 2006.

Here, I would like to tell you several important things, which can help you to understand the title to this photo and role of this square in our history.

1. The Red Square is a symbol of Russia. In its architectural ensemble it is considered to be one of the most beautiful squares in Europe;

2. Through the ages it changed its name many times and only in the 17th century it received its present name "Krasnaya". Right translation is "The Fine Square", because of the Russian world "Krasnaya" in old Russian language means "Fine" or "Beautiful");

3. The square is not very big as it seems: 695 m in length, 130 m in width. and it's very impressive from all its sides, surrounding by Kremlin wall and towers (right of the photo), St. Basil cathedral (left on the photo), GUM - State Department Store (on the left left, outside the photo), and State Historical Museum (on my back when I took this photo :));

4. In middle ages this square used to be the main place in Russia, that has witnessed many events: from coronations of Russia's Tsars, to enemies' attacks. Also it was the main trading place in Moscow, and the place where the Tsars' were addressing the people. In the Soviet times, it was the place where the Soviet government would address the people, and where Soviet military was showing its strength and power at the Victory Day's parades.

5. Red Square is a popular attraction for both Russian and foreign visitors alike. It provides plenty of photographic opportunities, while the area between St. Basil's and the Moscow River is often used for rock and pop concerts.
It is closed for public every Thursday.

PS: From my heart, I would like to send my best wishes to all people in our small World, spend GREAT time during this winter holidays. No wars - only Peace for all countries and nations, and NO TERRORISM in FUTURE on our small planet! Lets leave and work together! Merry Christmas and Happy New 2006 Year!

Important Event in My Business - Getting New Ford Fiesta