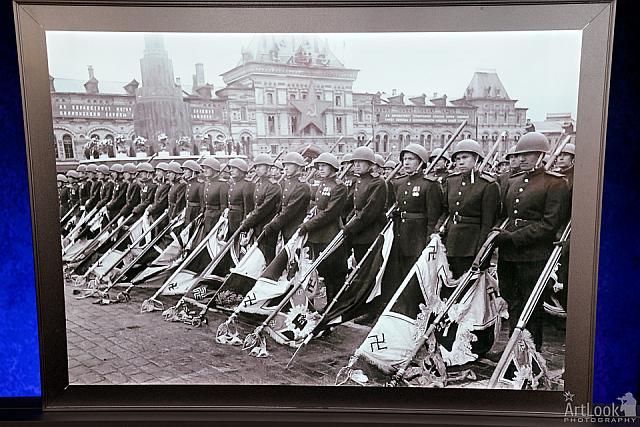 «Flinging Down Nazi Standards on Red Square» - See photo in Gallery
Victory Parade in Russia - traditionally held on the Red Square in Moscow on May 9, the Day of the Great Victory and the capitulation of Nazi Germany to the Soviet Union. Besides Moscow, parades traditionally are held in other cities - the heroes of the former Soviet Union. However, 69 years ago, the first the first Victory Parade was held on June 24, 1945, over a month after the Germany surrendered to Soviet commanders, when most of divisions, soldiers and officers of Red Army were able to return back from Europe.

Joseph Stalin, the then-leader of USSR, watched the entire event unfold from the rostrum of the Lenin Mausoleum. The decision to hold the Victory Day parade on Red Square was taken by Stalin in the middle of May 1945, shortly after the defeat of the latter is the resistance group of German troops on May 13.

Georgy Zhukov, a Marshal of the Soviet Union, was the parade inspector, since he was the one that accepted the German surrender to the Soviet Union.  During ceremony of the first Victory Parade on the Red Square, honored officers and soldiers including “SMERSH” department of Military Counterintelligence were flung down captured Nazi regimental standards in front of the Lenin Tomb (Mausoleum), to be trampled by Soviet marshals riding white horses (can be seen on the attached picture).

The first Victory Parade was prepared very carefully. According to the memoirs of veterans, rehearsals took place one and a half months. Soldiers and officers in the four years are accustomed to crawl on their bellies and short dashes move, you had to learn to mint a step at 120 steps per minute.

First on the pavement drew the strip along the length of the step, and then even pulled the rope, helping to set the height of the step. Boots covered with a special varnish, which mirrors the sky, and on the soles nailed metal plates that helped coin step.

The parade began at ten o'clock in the morning, almost all the time pouring rain at times turning into rain, which recorded a newsreel. Participated in the Parade of about forty thousand people. Zhukov and Rokossovsky went to Red Square on a white and black horses, respectively. Stalin himself from the rostrum of the Lenin Mausoleum only watched the parade. Stalin stood on the podium of the Mausoleum on the left, behind the middle of the front-line generals - the winners. On the podium was also attended by Kalinin, Molotov, Budennyi, Voroshilov, and other members of the Political Bureau of the Central Committee of the Communist Party.

Zhukov "adopted" Parade at Rokossovskogo with him galloped along the soldiers lined up in rows and greeted them triple "cheers", then took the podium of the Mausoleum and read the welcome speech devoted to the Soviet victory over Nazi Germany.

On Red Square marched solemnly mixed regiments fronts: Karelian, Leningrad, 1st Baltic, 3rd, 2nd and 1st Belorussian, the 1st, 4th, 2nd and 3rd Ukrainian, combined regiment the Navy. In the regiment of the 1st Belorussian Front particular column were representatives of the Polish Army. Ahead of the marching columns fronts were the commanders of the fronts and armies with his sword unsheathed. Advertise connections carried Heroes of the Soviet Union and other order-bearers.

They were moving column of soldiers special battalion of the number of heroes of the Soviet Union and other particularly distinguished themselves in combat soldiers. They carried banners and standards of the defeated Nazi Germany, who have dropped to the foot of the mausoleum and set on fire.

Next on the Red Square have been part of the Moscow garrison, and then rode the cavalry, drove the legendary carts, proceeded connections defense, artillery, motorcyclists, light armored vehicles and heavy tanks. In the sky swept planes piloted by renowned aces.

Victory Parade dedicated to the eponymous film by Yefim Teachers, filmed in 1945, one of the first color film in the USSR.

In 1948 the tradition of festive parades in Red Square was interrupted and continued with its former power and splendor only in the anniversary year of the 20th anniversary of the Victory - in 1965.

After the collapse of the Soviet Union in the Victory Day parade for a while again stopped. They were revived again only in the anniversary in 1995, when Moscow were once two parades: the first (foot) on the Red Square and the second (with equipment) at Memorial Victory Park.

Since Victory Day parade on Red Square every year.

Customarily, heavy weaponry and aviation were used during the parade. However, during the 90s this tradition was temporarily aborted and resumed once again only in 2008.

Victory Parade is a very interesting and one of the most important event to witness in Russia. So if you’re ever in Moscow during this time, make sure not to miss this grandiose display of military might of the country.

June 22 - the Day of Memory and Sorrow in Russia