Military Parade in Moscow Kremlin on the Children’s Day

News : « PREV | NEXT »
«Ready to Start the Military Parade» - See photo in Gallery
On June 1, the International Day for the Protection of Children, especially for pupils, the ceremonial changing of foot and cavalry guards with participation of servicemen of the President regiment, took place on Cathedral Square of the Kremlin in Moscow. Also participating were a team of young children, riders from the 'Kremlin Equestrian Riding School'. Children wearing the uniform of the Presidential Regiment's Cavalry Escort showed the art of horseback riding on an equal footing with experienced equestrians, as they performed a children's cotillion on Shetland and Welsh ponies. The riding program was specially worked out (developed) for the show on Cathedral Square of the Kremlin in Moscow.

The Guard Mounting Ceremony dedicated to the Children’s day is provided from 2007. It took in the centuries-old experience of gala parade marches of the Russian Army. The Kremlin Equestrian Riding School” (KERS) was established in 2006 with the participation of the Moscow Kremlin Commandant Service of the Russian Federation Security Service.

From the very first days school's mission has been concluded in the following words: "Culture and tradition of riding for the benefit of the people". It includes a range of values and aspirations, such as the promotion of a healthy lifestyle, the patriotic education of the youth and even the idea of reviving the horse ceremonies and military parts of equestrian sport as an integral part of the Russian culture. 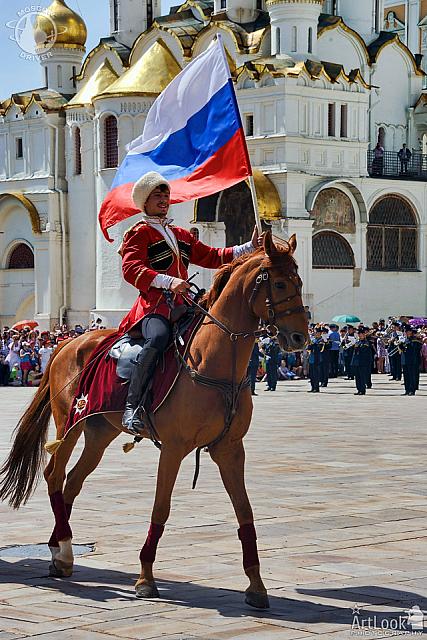 «Cheerful Cossack with Russian Flag» - See photo in Gallery
This year in the event for the first time took part a team of riders from the Kremlin School of Horse back Riding that recently created a furor in the most popular event in equestrian sport "Horses & Dreams" that took place on 17 - 21 April 2013 at Hof Kasselmann in Hagen, Germany. The Kremlin Equestrian Riding School team provided a truly unique program, which involved riders dressed in traditional Cossack costumes, stylized form of His Imperial Majesty's Convoy with traditional armor and horses of originally Russian breed - Don and Budenny. The lucky  spectaculars who were able to get a ticket into Moscow Kremlin and find a place at the square on June 1st had opportunity to watch "Horse Pair Parade", work on cardio and with traditional Cossack service weapons in dismounted formation.

More than thousand Moscow pupils, who was invited on the famous Kremlin ceremony at noon on June 1st, 2013, have seen with fascination the show that demonstrate the limitless possibilities of the man and the miracles of harmony between the rider and his horse. No doubt, that those kids will memorize this event for a long time.