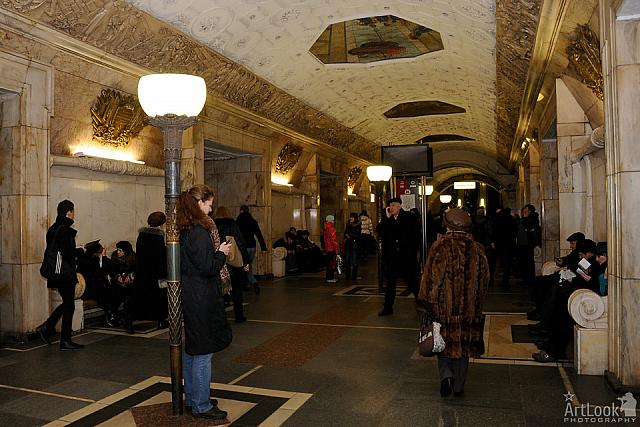 «Richly Decorated Central Hall of Novokuznetskaya Station» - See photo in Gallery
One of the interesting tours that I offer to my clients is a visit to the Moscow subway. The idea of creating an underground road for traffic appeared in the beginning of twentieth century. However, the construction of the first subway began only in 1931 from Sokolniki to the Park of Culture with a branch to the Smolensk square.

Nowadays the Moscow Metro has 12 lines, light subway and monorail. All stations are unique and beautiful in their own way. Unfortunately, in order to visit them all, you need to spend many days. I invite guests to visit the ones that have the greatest cultural and historical interest from my point of view. Among them are the Revolution Square, Arbatskaya, Kievskaya (Arbatsko-Pokrovskaya Line № 3); Kievskaya, Belarusskaya, Novoslobodskaya, Komsomolskaya (the Ring line number 5). Let us dwell a bit on each. 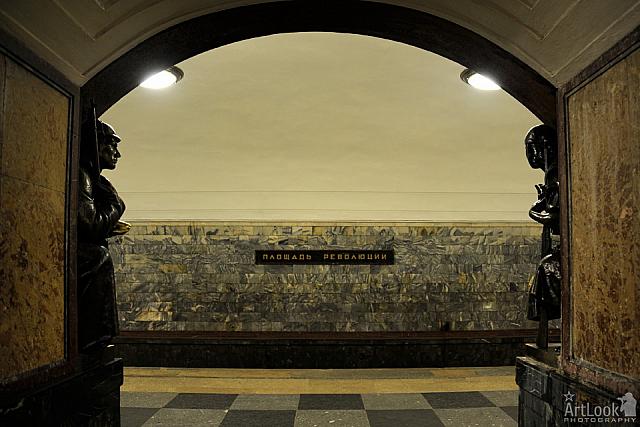 «Sign “Ploshchad Revolyutsii” in Archway with Bronze Figures» - See photo in Gallery
The station was built in 1938. Now it has two ground lobbies: The Western (built 1938-1946 year) and The Eastern (completed in 1947). The depth of the station is 33.6 meters. A black Armenian marble, combined with white, gray and gold marble of other types is used in finishing of the station. The floor is laid out bright and black granite. The station hall is illuminated by two rows of round flat chandeliers. There are 76 bronze sculptures depicting the Soviet people installed in the recesses of each of the arches formed by the pillars of station hall. During the Second World War sculptures were evacuated to Central Asia. They suffered greatly during evacuation. Fortunately, they all managed to restore to their former appearance. All figures (except for figures of the pioneers) are depicted getting on one knee, bending or sitting in order to fit in a limited amount of vaulted arch passageways.


Most recently - in the year 2008-2010 – the Eastern lobby was renovated. Because of the terrorist attacks in the Moscow subway that took place several hours before the planned opening of the East lobby after renovation, the solemn part of the event was canceled.

Subway Arbatskaya is located on the same subway line as the station "Revolution Square." It was founded in 1953. It received the name in honor of the Arbat Street. It has one ground lobby (Western). Initially, the lobby was in a separate building, but the new building of the General Staff of the Ministry of Defense started, the lobby appeared to be in its atrium. The old exits were bricked up; a new entrance was built into the building of General Staff of the street Vozdvizhenka. There is a huge frame with a missing portrait in the ground lobby - until mid-1950 there was a portrait of Stalin. According to some reports, it survived, but closed with plaster.

The lobby was restored and partially reconstructed in 2007-2008.

The depth of the station is 41 meters.

Pylons are finished with red marble at the bottom, decorated with bouquets of flowers made from ceramics. The floor is laid out with gray granite. The walls lined with glazed ceramic tiles, white top and black bottom. The station hall is illuminated by massive bronze chandeliers in the form of rings.

There are several subway stations "Kievskaya" in Moscow, located on different branches. This name is quite popular. It comes from the capital of Ukraine - one of Russia's nearest neighbors - the city of Kiev. The name is fully consistent with the idea of the subway station. The interior the station devoted to Soviet Ukraine and the reunification of Ukraine and Russia. The station is decorated with a large number of paintings .Twenty four murals depicting workers of Soviet Ukraine are placed on the arch above the pylons. The wall from the side of platform also contains frescos, mainly with images of fantastic plants. Pylons are decorated with light marble and additionally decorated with colorful ceramic cornice. The butt of the station has a large mosaic, depicting festivities to celebrate the 300 anniversary of the reunification of Ukraine and Russia.

The station has a pylon structure. Eighteen pylons are decorated with mosaic panels of glazes, decorated on the theme of Ukrainian history and friendship between the Ukrainian and Russian peoples, which started in the mid-17 century.

On the front wall of the central hall of the station a large panel with molding in the form of flags and a mosaic portrait of Lenin in the center are located. There are lines of the Soviet national anthem around the portrait, and under the portrait - the words of Lenin. One of the ways out of the station was designed by French architects modeled on the Paris Subway in 2006.

At one of the mosaics – “The Struggle for Soviet power in Ukraine "- modern passengers observe a mobile phone and PDA in the hand of one of the guerrillas, and on his knees - a laptop. In fact, he uses a field telephone, which was really a heavy thing (guerrillas holds it in two hands), and thing that people see a laptop is the lid of a box with a telephone. However, these phones have begun to produce only in the second half of the 20-ies of XX century. We must assume that the mosaic depicts a foreign field telephone transmitter.

The founded of the station was in 1952. It received the name after the Belarusian railway station nearby. The station has two ground-based lobbies. The Western one goes to Tverskaya  Zastava. It is decorated with beautiful carvings. The Eastern one leads to Butyrskiy shaft and Forest Street. The Eastern lobby is known for its majolica panels.

The station Belorusskaya is located at a depth of 42.5 m below ground. The diameter of the central hall is 9.5 meters.

Pylons are faced with light marble. The walls lined with white ceramic tiles, the floor is covered with ceramic tiles, gray, white and red colors. Lamps placed on pylons, in the form of vases made of glass and marble. The theme of decoration is economy and culture of Belarus. Decorative pattern on the floor repeats the theme of traditional Belarusian embroidery. Decorations of the ceiling consist of stucco decorations and 12 mosaic panels depicting the life of the Belarusian people.

Built in 1952, Subway station Novoslobodskaya got its name from the eponymous street:  the station is located at the very beginning of it.

Novoslobodskaya is pylon station of deep foundation (its depth is 40 m) with three arches.

Exit to the street is through the ground lobby with column portico, located on Novoslobodskaya Street lined with gray marble. Pylons of the underground station are faced with marble from the Urals. Thirty two spectacularly illuminated stained-glasses, placed inside the pylon and bordered by steel and gilt brass are splendid decoration of the station. A remarkable mosaic "World Peace" is located at the end of the central hall. The picture depicts a happy mother with a baby in her arms; it was the face of Stalin at the picture: the child gave a hand to him. But in times of Khrushchev the face of the former leader of USSR was removed from the panel. The walls are lined with bright marble; floor is covered with white and black granite slabs, placed in a checkerboard pattern.

The station was built in 1952 and named in honor of the Komsomolskaya Square, which is situated nearby.

This subway station is the station of the deep bedding. Its depth is 37 meters. The station has column and three- arched design. Cast iron decoration is used in the construction, monolithic slab used as a tray for a collapsible finishing. The length of the boarding hall is 190 meters; width of it is 10 meters. There are 68 octagonal columns at station.

The main theme of the interior of the station is the fighting of the Russian people for their independence. The ceiling is decorated with eight station mosaic mural made from glazes and precious stones. Six of them represent the Alexander Nevsky, Dmitry Donskoy, Kuzma Minin and Dmitry Pozharsky, Alexander Suvorov and Mikhail Kutuzov, the Soviet soldiers and officers at the walls of the Reichstag.

Two other panels, depicting Stalin ("Victory Parade" and "Presentation of the Guards Banner"), were replaced after the dethronement of Stalin's personality cult in 1963. New panels depict Lenin's speech in front of the Red Guards and the Motherland on the background of the Kremlin's Spasskaya Tower.

The yellow ceiling is decorated with mosaic and moldings. The hall is illuminated by massive chandeliers hanging between the panels; platforms are illuminated with smaller chandeliers. The columns are decorated with marble capitals and trimmed with light marble, as well as the wall station. The floor is laid with pink granite. There is a bust of Lenin at the end of the hall. At the opposite end of the escalator is a large Florentine mosaic of the Order of Victory with red banners on the background. The ground lobby of the station is decorated with bas-reliefs.