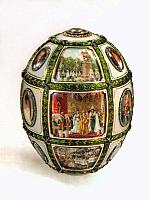 The Fifteenth Anniversary egg (also known as the Love Trophies egg) is an Imperial Faberge egg, one of a series of fifty-four jeweled enameled Easter eggs made under the supervision of Peter Carl Fabergé for the Russian Imperial family. It was an Easter 1911 gift for Tsaritsa Alexandra Feodorovna from her husband Tsar Nicholas II, who had a standing order of two Fabergé Easter eggs every year, one for his mother and one for his wife.