The Magic of Moscow

Do you believe in magic? The world is full of untold fairy tales and everyday miracles. There many holidays during a year, but one of the most favorite all over the world are winter holidays, New Year Eve and Christmas. In this photo album, you will see how beautiful Moscow city in and out during this truly magical holidays! 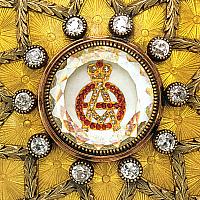 The top part of Imperial Coronation Egg of Fabergé with the monogram of Tsarina Alexandra Fyodorovna Romanova, the wife of Empire Nicholas II, encrusted with rubies and diamonds. The tsarina’s monogram combines two Cyrillic letters of her name shown in old Russian font style: letter “A” (similar in English) and letter “Ф” (matches F in Latin alphabet) rotated 90 degrees counter-clockwise.