Ded Moroz and Snegurochka ride through the Triumphal Arch 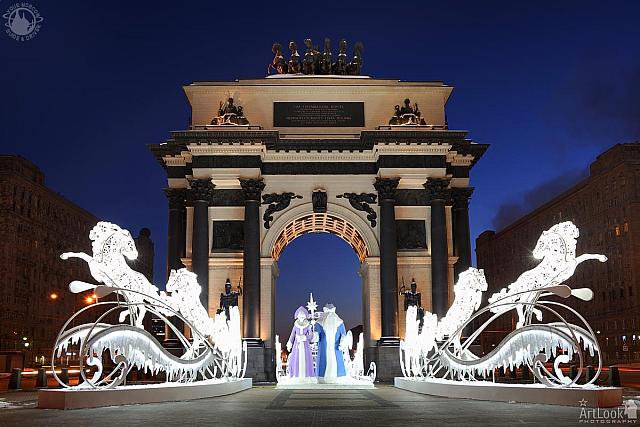 «Ded Moroz and Snegurochka ride through the Triumphal Arch»

The Triumphal Arch of Moscow was built in marble in 1829-1834 on Tverskaya Gate Square to design of the prominent Russian architect Joseph Bove's in order to commemorate Russia's victory over Napoleon instead of original wooden arch that was built after the war 1812-1814 by orders of Alexander I.

However, in 1936 the arch was demolished, part of the sculptures were given to the Museum of Architecture in the Donskoy Monastery. In 1966-1968 the Triumphal arch was recreated at the new place - on Kutuzov Avenue next to the museum-panorama “Borodino”. Triumphal arches and gates symbolize the victory of the Russian people. During the construction of the Triumphal arch O. Bove used white stone from village Tatarovo near Moscow, as well as black iron castings.

Overview magnificent churches from the entrance of the "New Jerusalem" Resurrection monastery in Istra after great restoration works at twilight on a nice Autumn evening.