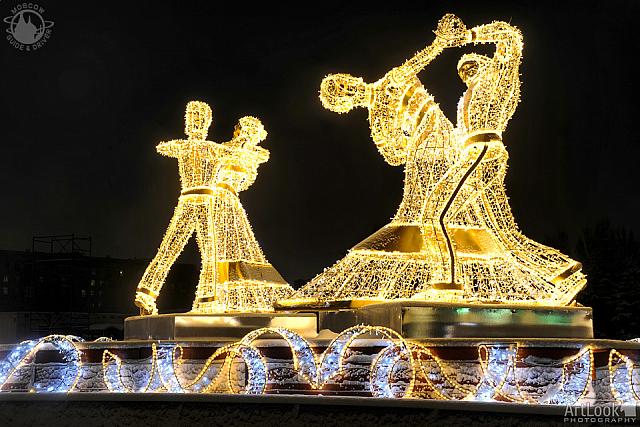 The amazing luminous sculptures and art objects were installed in the Victory Park on Poklonnaya Hill on the eve of the winter holidays 2017-2018. Over the bowls of six fountains closed for the winter appeared dancing couples, the wire sculptures illuminated with hundreds of LED lights at night.

The waltzing couples do not resemble one another, each of them performs its dance steps. The faces of dancing men and women are hidden by golden carnival masks. In the evening hours, these light installations flick and shimmer, producing an incredible impression on the visitor of the great WWII memorial complex and the popular park in Moscow.

Soviet T-34 tank with waving red banner at the beginning of Tverskaya street in the background of hotel National before the beginning of the 1st Night Rehearsal of 2018 Moscow Victory Day Parade on Red Square, devoted to the 73rd anniversary of the Victory in the Great Patriotic War 1941-1945.