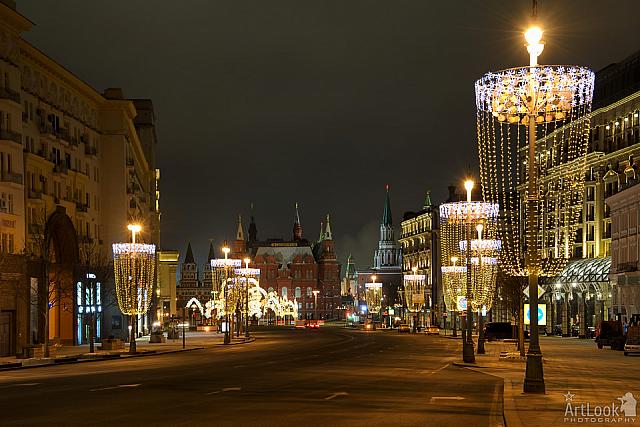 Night view of the revamped Tverskaya street in direction to the Red Square and Kremlin on early dark and frosty morning with new old-style street lamps decorated with light garlands and sparkling snowflakes in the shape of a wine glass for winter holidays (season). The building from a red brick in background of the picture is the State Historical Museum and Kremlin tower with a red star on its spire.

In the winter season 2016-2017 Moscow streets and squares were beautifully decorated with musical forests, light fountains and wineglass-shaped street lamps that became the highlights of Moscow’s new holiday decoration concept.

Tverskaya street was revamped in summer 2016 under the city project “My Street”. Its sidewalks were widened and paved with granite stone, overhead cables were moved underground, more trees planted, and navigation posts with Wi-Fi installed, and the street as many overs became more bright and festive at night with new street lamps.

St. Basil's Cathedral and Steam from the Central Power Plant

View from VIP necropolis at Kremlin’s wall on the Red Square on the famous Moscow’s landmark, magnificent St. Basil’s Cathedral, framed with steam rising up from Central Power and Heating Plant #1.