Moscow Traffic Jams: An Average-Sized Overview of a Big Issue

Moscow has long been the center of the entire Soviet Union, and apparently that feeling grows on you when you’re a big metropolis. It is almost as if the processes in Moscow are being governed not by the Government, but merely by the laws of gravity: one could use a business map of Moscow to explain astrophysics, with Kremlin being the gravitational center with the highest density and rapid orbital movement of more and more attracted objects around it.

I respect my readers way too much to waste your time explaining “Why Traffic Jams Are Bad.” It is enough to say that the almost constant traffic in Moscow has put the city on top of the “worst traffic jams in the world” list. The majority of roads (even those that are being considered and used as highways) have been built in 70’s and 80’s, thus, there are never enough multi-lane roads for a major city such as Moscow. The majority of the action (figuratively speaking, because it is, in fact, the opposite, which is precisely the problem) happens early in the day when people drive to their jobs and in the evening when they come back (the so called “pendulum migration”). Subways, by the way, do not help that much, they are insanely overcrowded as well. Finding your way around these Moscow traffic jams and getting wherever you’re going on time is almost an art, so if you are a foreigner, you need a good guide in Moscow. I can say proudly that I have spent years mastering this art: not only do I know every single little road, but in present days I am using Traffic Jam Technology by Yandex to ensure that I get all the updates on current traffic in Moscow. This way I am always updated on which roads aren't currently jammed, enabling me to get you to your business meeting, sightseeing, or wherever you need to be in the shortest time possible.

…You know, even though it is sort of a self-promoting article, I feel like it might serve a few good purposes simultaneously, by being educational, thought-provoking, and, hopefully, entertaining. Also, as professional, I prefer to share a sophisticated opinion on the field, rather than bragging about how great I am throughout the entire article. Nobody likes long commercial pauses, and, as I said, I respect my readers way too much to give you that. And of course there are tons of reasons to go to Moscow: it’s big and beautiful, and I love it with all my heart, which is why I care about its issues.

So what I am trying to say is that it’s not merely a transportation problem that causes all the pressure. The core factor is that there is only once center from which the whole city is living: businesses, best apartments, political activities, all of the Moscow entertainment industry, great tourist attractions – everything is located in the center. There are a couple of most interesting yet slightly unnerving facts and observations about this.

Enough with Explanations: What Can Be Done about the Moscow Traffic? 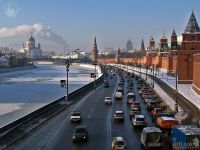 This problem is not new in a world-wide sense. There are many cities that have encountered the same issue at some point. Actually, pretty much all of the European capitals had this problem. And guess what, they’ve actually managed to solve it. If you were in charge, you wouldn’t need a PhD in astrophysics to figure out what to do in Moscow to solve this issue: what the Government must do is to simply relocate all the institutions further away in different directions, freeing the space in the center and balancing out the road usage.

Granted, it won’t be easy, as it will take a lot of time and ridiculous amounts of money to pursue such a grand goal, but that’s the only way. Of course, it will bring new problems, especially that “ridiculous amounts of money” bit. However, denying the problem is actually an unprecedented “strategy,” so it’s hard to say what exactly will happen when the density in the center reaches a critical point, but it sure won’t be pretty. According to astrophysics (yes, I am sticking to this) the mass just collapses on itself and a black hole is born, devouring matter, light, space, and time.

Enough with Theorizing: What Actually Gets Done

So what does the Government do about the traffic jams in Moscow? Well, to shake off that gloomy picture I just drew, I can say that there is actually some sort of a plan in motion. “Some sort of” because it won’t completely solve the problem, and even if everything goes as planned, it will take a really long time to feel a positive effect, but we are running ahead of ourselves. The plan is to build an entirely new city district by 2018 in what’s now basically a wilderness. The new district will be called “The Big Moscow” and is supposed to become a new home for various clusters, including medical, financial, educational, federal, and other institutions. Obviously, the transport system is meant to be highly efficient.  That’s pretty much all there is to that plan, so let’s quickly get to criticizing it.

Well, alright, not really criticizing, but analyzing it. Transportation is surely important, but the new district should not merely host medical, federal and educational institutions, because considering pendulum migration people will still be rushing across the city, just in two different directions. Also, the “Big Moscow” must provide good but affordable places to rent and purchase, to help relocate all the “Old Moscow” activities, and to satisfy all the needs and wishes of customers, so that people will actually move there. In conclusion, in a decade I will see if the traffic in Moscow will completely come to a stop or if the government will actually be able to do something about it. Only time will tell.