Tweet
Photo Gallery Moscow from Car
Next Previous 5 of 7 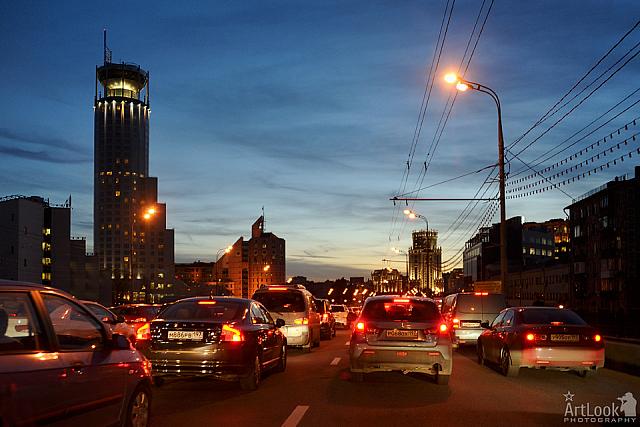 Bolshoy Krasnokholmsky Bridge spans Moskva River carrying Garden Ring, the main ring road around downtown, historical center of Moscow city. Moscow's Garden Ring is one of the busiest roads in the city with heavy traffic most of a day, but rush-hour traffic might be often as nightmare for local drivers with many kilometer terrible traffic jams that course transport collapse in the whole city center almost every evening after workday. In spite of quite wide city roads, but due increasing amount of cars every year, it's no surprise that it is considering that Moscow city has one of the worst traffic jams in the world and no wonder that cars became the part of Moscow life and cityscapes.. However, it is true for any big city in the world!

On background of this picture is high-rise tower of Swissotel Krasnye Holmy, 5-star hotel in Moscow managed by Swiss?tel Hotels & Resorts.

In the Upper Alexander Garden, near Kremlin wall and Arsenalnaya (Arsenal) tower it is located Tomb of the Unknown Soldier, the main memorial in Russia to the Soviet soldiers who died in the Great Patriotic War 1941-1945 (WWII). It was unveiled in December 1966 when Soviet Union (USSR) celebrating the 25th anniversary of its victory over Nazi troops in the battle of Moscow.