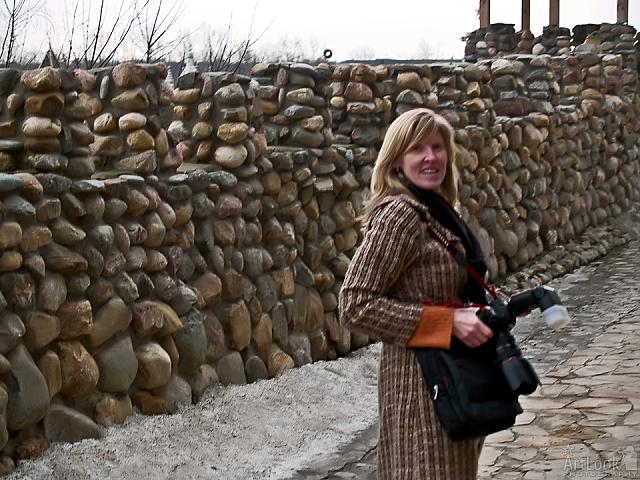 «Walking at walls of Izmailovo Kremlin» - See photo in Gallery
At the beginning of March (5th) I received a request from Lynn Frieda, freelance photographer living in London, who had been hired by "Departures" magazine to photograph a story for their October 2007 issue. This is going to be a special issue about Russia. From the photo editor of this magazine, Lynn got a list of places in Moscow that would be of interest for future articles. She wanted to organize photo shooting from March 11th to 13th. It was an unrealizable task for Lynn to make all by herself: pre-production calls prior to the shooting, find contacts and make arrangements with the people who are responsible for giving permission for photo shooting and get agreement, setting up the schedule for these days to cover everything (or at least as much as possible). Transportation was also important because there were a lot places to visit in a short time.


Looking on the Internet for somebody who could help her to accomplish this hard task, Lynn found my website and decided to contact me. I can say that it was not my usual type of request. At first I thought it might be difficult to fulfill this request especially after I was given the list of all the places we would have to visit in 3 days. Also I know for sure that it is difficult to make arrangements for photo shooting in Russia. But at the same time, this request sounded interesting to me because I like photography and, at the same time I would have an opportunity to make some contacts with people associated with the famous places of Moscow. So I thought "why not. I have to be positive and at least try" I had to start right away because I had only a week's advance notice plus the 8th of March was a big holiday in Russia - International Women's Day. It took me almost two days to make all the arrangements. It was not an easy task, especially at the beginning, but when I started to receive positive answers and make appointments, it gave me much more energy and assurance that I can do it.

Between 11th to 13th of March we visited:

Lynn also had requested a special photo shoot near St. Basil using a car from "Pink Taxi" (Moscow transportation service created and run by women to be special taxi service for women). Here we had some problems with a guy from Federal Security. Because we were in the area of Red Square, all professional photo shooting using professional cameras need to have special permission from the Administration of the Moscow Kremlin including payment of a fee. Because I had such short notice for the photo shot, I was not able to receive official permission which is a difficult and complicated process. During our "lovely" (read "intense") conversation, when the security officer insisted that we delete the pictures from the camera's memory card, Lynn even had a thought that he can take away her expensive camera or even send her to prison (this man looked very strict and hard). ). When he asked me to delete the pictures, I tried to translate Lynn his request/order slowly, giving idea that she has to pretend to delete these pictures at least to delete some pictures but not all. Of course it was some risk that he could check her camera, but I tried to keep talking with him to divert his attention from Lynn. After finishing my confident talk I showed Lynn that now we can and after checking that we moved away on enough distance, I impatiently asked: "Did you delete them all? ?", but she responded: "No, I've got all pictures! "

So, at the end of our work everything was OK and we able to accomplish the main task and my client, Lynn Freida, left Moscow with a lot of interesting pictures and exciting memories!

If you liked this story, you may want to visit a website of the talented freelance photographer Lynn Grigsby Frieda: Have Camel Will Travel Photography.

Picture of a Day on My Birthday