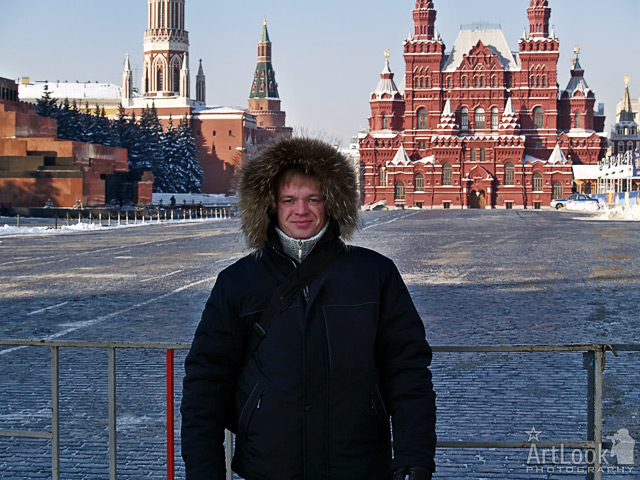 «Tour of Red Square in a Warm Parka» - See photo in Gallery
One can’t come to Russia and not visit the Red Square – a point where all tourists make the acquaintance with our country, a point where Moscow's major streets — which connect to Russia's major highways — originate from. It’s a cultural, historical and political centre of the capital and all Russia.

Moscow’s Red Square is the most famous and symbolic, its history begins in the end of 15th-the beginning of 16th century (approximately 1493), when a brisk trade square sprang up by the East side of the Kremlin walls. The square was called Torg (Market) or Veliky Torg (Great market). On the southern side was confluence of two rivers – Moskva and Neglinnaya River, so the square was the landing stage and trade center for Moscow. In the 16th century the Square was called Troitskaya by the name of the Troitskaya (Trinity) Church, located on the place where now Saint Basil’s Cathedral is. There have been a lot of fires here in the Middle Ages, so it also has another name - Pozhar, which means "burnt-out place".  From the 17th century it was called "Krasnaya" (Red), which also meant "beautiful" in Old Russian.

Moscow Kremlin stands on the West side of the Red Square, and almost all the opposite side of it is occupied by the Upper Trading Rows (now GUM), built in 1894 to replace the previous trading rows that had been designed by architect Joseph Bove. The GUM building consists of three horizontal arcades, each is on three levels, and it has more than a thousand shops in it.

In front of Saint Basil’s Cathedral there’s Moscow’s first monument dedicated to national heroes - merchant Kuzma Minin and Prince Dmitry Pozharsky, who gathered an all-Russian volunteer army to rise against the forces of the Polish-Lithuanian and Swedish Commonwealth from Moscow and expulse the foreign invaders from Kremlin in 1612. Originally, the statue, created by sculptor Martos and solemnly unveiled in 1818, stood in the centre of Red Square, across the entrance to Upper Trading Rows, but in 1931 the Communist authorities found the monument was obstructing parades on the square and in 1936 the statue was moved closer to Saint Basil’s Cathedral.

Lobnoye Mesto – high iron-barred stone platform - is situated on the left of Saint Basil’s Cathedral. It was a rostrum for the Tsar's public announcements and sentences for criminals and was built in 16th century. If you throw a coin right in the middle of Lobnoye Mesto and make a wish it will surely come true. There’s also a tradition to make wishes standing on Kilometer Zero, which is situated not far from here, near the Voskresenskiye Gate.

Lenin's Mausoleum is located by the Kremlin’s wall. It’s a centre of The Kremlin Wall Necropolis, where the most honored figures of Soviet Union are buried. Initially made of wood, the Mausoleum was built in 1924 by architect Shchusev to preserve Lenin’s body. Inside the building has a vestibule and a hall of honor, connected by to side stairways. In the centre of the hall on a black labradorite pedestal lies the coffinette.

The Northern side is occupied by the State Historical Museum (architect V. Shervud, engineer A. Semyonov, 1875-1883) with a traditional Russian cuisine restaurant. Its architecture incarnates the ideas of national history. Old Russian patters are borrowed from different 17th century buildings and blend in perfectly with the ensemble.

Moscow’s Red Square is favorite place in the capital not only for tourists, but for residents too. It’s a symbol of the city, its heart. All Russian history is represented in its image.

Once visited the Red Square of Russian capital, you’ll be sure to remember the chime of Kremlin Clock – the clock strikes midnight and midday with national anthem, "Glory, Glory to you, holy Rus'!" from the opera "A Life for the Tsar" by Glinka at 9 a.m. and 9 p.m., and ringing every quarter hour.