Annual Parade of Retro Trolleybuses held in Moscow on Nov 15, 2014 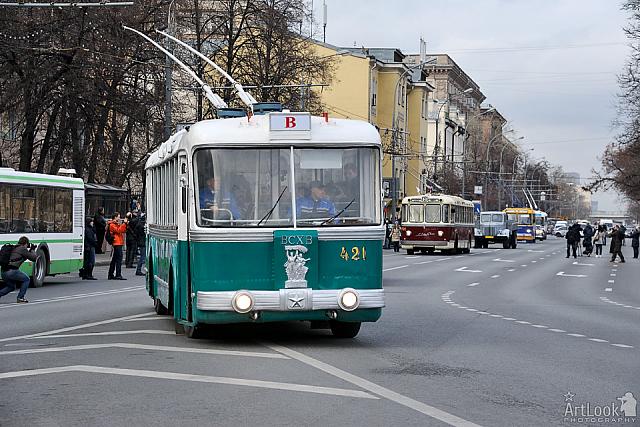 «Vintage Trolleybuses Parade 2014 Started» - See photo in Gallery
On November 15, 2014, the Russian trolley bus service has held an annual parade of vintage trolleys, where the old fashioned vehicles could be seen on the rout along the main streets of the Russian capital, including Tverskaya Street, Kremlevskaya Embankment, Novy Arbat Street and Kutuzovsky Avenue. This was the second parade. The first one was one year ago marking 80th birthday of Russian trolley buses, much mean that this year they celebrated 81st anniversary. The parade of the vintage trolleybuses was also joined by a couple of old soviet police cars marking 78th anniversary of GAI (short for State Traffic Inspection in Russian), the Soviet/Russian Traffic Police. The column started to move at noon from the stop "Belorusskiy Vokzal" (Belarus Railway Station) on Leningradsky Avenue (double route) and finished in Filevsky bus-trolleybus park.