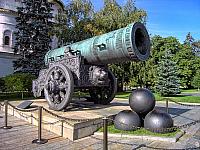 The impressive bronze Tsar Cannon is one of the largest canons ever made and was cast in 1586 by the foundryman Andrei Chokhov. The canon is 5.34 meters long, weighs an impressive 40 tons and has an incredible caliber of 890 mm. It was originally created with the purpose of defending the Kremlin's Savior Gate, which leads to Red Square, but the canon was never actually fired and has remained on display in the Kremlin as a fine example of Russian workmanship ever since.