Under the huge barrel of the famous Tsar Cannon 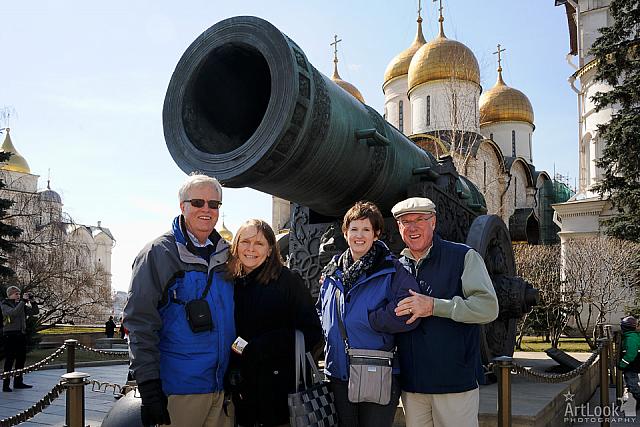 «Under the huge barrel of the famous Tsar Cannon»

These are my Dear clients from USA, two nice American couples, Bill & Cheney Hibschman and Rick & Lynn Jones, standing under the huge bronze-cast barrel of the famous Tsar Cannon on the grounds of Moscow Kremlin. The cannon was cast in 1586 in Moscow by the Russian master bronze caster Andrey Chokhov to protect the main gates of the Kremlin at Savior Tower (Spasskaya Bashnya). This bronze cannon is the largest in World, and it is listed in Guinness Book of Records. The internal diameter of its barrel is 890 mm (35.0 in), the length is 5.94 m (19.5 ft) and the weight – 40 tons. On the background of the picture the golden onion domes of Assumption Cathedral are shining. This is the main church of Moscow Kremlin, that was the site of coronation of Russian tsars for six centures.

Photo #126 taken on April 12, 2014 with my Dear American clients during tour of Moscow Kremlin grounds and cathedrals.

Monument to Peter the Great Under White Clouds in Summer

View of the monument to Peter the Great on the river Moskva (Moscow) covered with beautiful white clouds on a blue sky. The impressive 98m (328ft) high monument from steel and bronze was erected not far from Moscow Kremlin in 1997 to commemorate the 300th anniversary of the Russian Navy that was founded by the famous Russian tsar, Peter I (The Great).