At the Biggest Cannon in the World 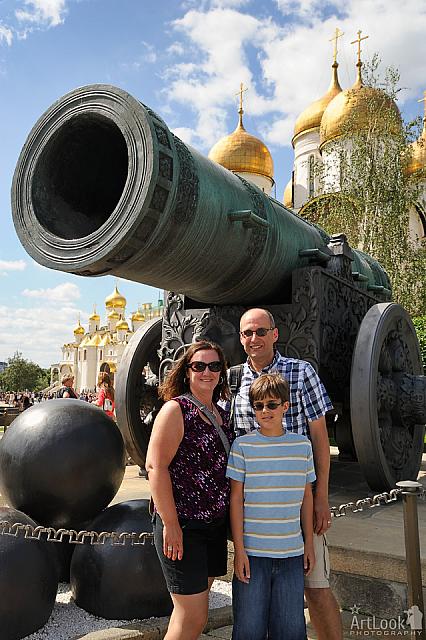 «At the Biggest Cannon in the World»

My Dear clients from USA, Anita, Dean and Owen, are standing at the Czar Cannon, the biggest cannon in the World located in Moscow Kremlin. It’s 40 ton bronze barrel in caliber 890 mm was casted in 1586, on the third year of the reign of Czar Feodor I, by prominent cannon founder Andrei Chokhov. The idea to create so enormous cannon to “amaze the common folk and inspire awe in the Tartars” belonged to Boris Godunov, Czar Feodor I’s brother-in-law, who ran the country de facto. Its carriage and balls were designed and casted for decoration in 1835 when Emperor Nicholas I ordered historical Russian cannons to go on display outside the Kremlin barracks.

Photo #064 taken on July 25, 2015 during 1,5 hour tour of Moscow Kremlin with watching ceremony of changing foot and cavalry guards of Presidential Regiment.