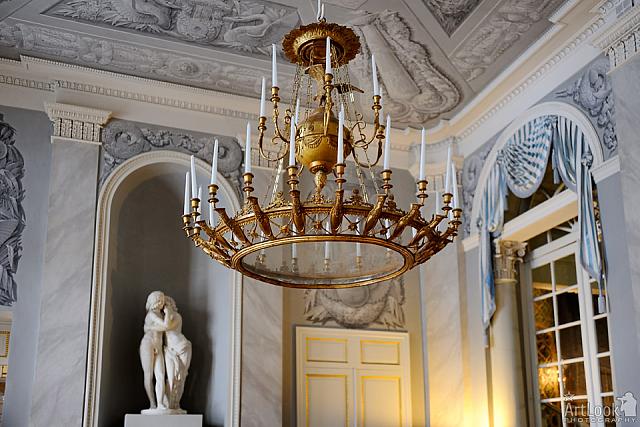 The very light in weight and form 28-candle molded gilt chandelier in the Grand hall of the palace was made in Moscow in 1820-1830s from papier-m?ch? and a priming mixture of alabaster and chalk, which gives the impression of gilded bronze.

The Grand vestibule (old name «Grand Seni») is the ceremonial entrance to the Grand Palace in Arkhangelskoye and its first hall. Architectural proportions and d?cor of its interior go back to idea of the French architect Gern, whose project of the Palace dated to 1780 was realized and developed in the 1-st third of 19th century in Arkhangelskoye Estate. The half columns and Corinthian pilasters in the vestibule are like an echo, they repeat the colonnades in the Grand yard. It is known, that the palace is decorated in 1820-1821 by work of Italian painters Giuseppe Colombo and Pietro Rudzha with assistants, who were temporarily in Moscow at that time. The white marble sculptures “Cupid and Psyche” (in background of this picture) and twins “Castor and Pollux” (at the other side of the hall), give human-size proportions to the hall.