Entrance into the Court Yard of the Grand Palace 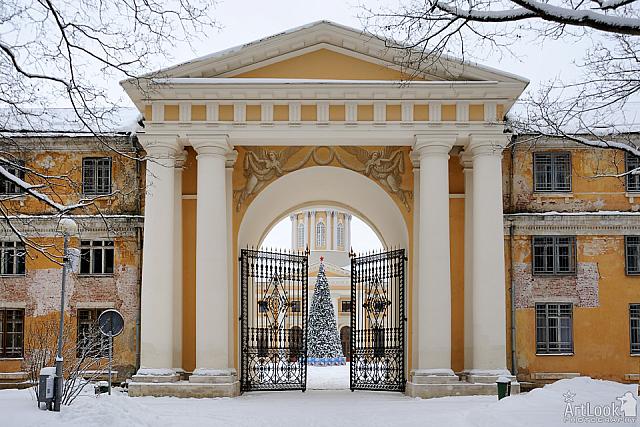 «Entrance into the Court Yard of the Grand Palace»

The Great Palace in Arkhangelskoye Estate was designed by French architect Charles de Guerne (1748-1789) and constructed by Russian masters in 1786-1790. It was the most lavish and celebrated playground for Moscow’s wealthy aristocracy and belonged to Golitsyn’s family (the background of the family connected with Peter the Great). The French architect designed a long, two-story masonry house crowned with a belvedere.

In 1810, the estate was bought by Prince Nikolay Yusupov and belonged to his family until the 1917 revolution. During that time, the estate entered its golden age and welcomed Russian Emperors as well as aristocracy and high society. The palace mostly was used by the family as a summer house (dacha).

After the War of 1812, when the palace was damaged by Napoleon’s troops, the best Russian architects of the time—Osip Bove, Stepan Melnikov, E. Turin and I. Zhukov—supervised a great restoration. After the reconstruction, the covered colonnades united the north facade of the house with its two wings to form the courtyard. In one of the wings (at the left and right of the entrance arch in this picture) was the art gallery and library of Prince Yusupov; in another, a kitchen with accommodation for his serfs.

Amazing Illuminated Peacock at the Entrance to the Moscow Zoo

The beautiful peacock figurine illuminated with colorful LED lights decorates the entrance to the Moscow Zoo from the Garden Ring (Sadovoye Koltso), the main ring around the historical center of Moscow city) during the current winter holidays 2018-2019.