Golden Domes of the Dormition Cathedral under Clouds (Vladimir) 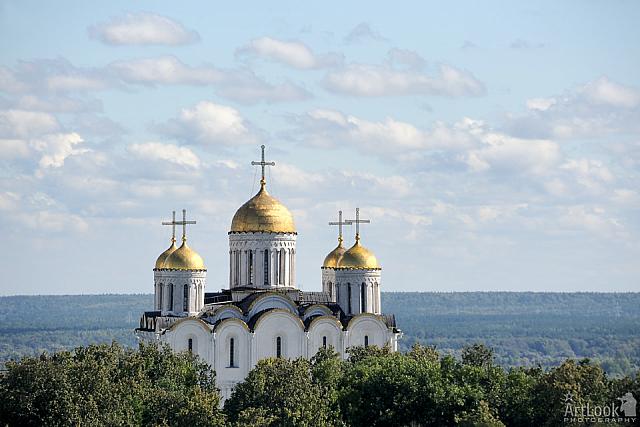 «Golden Domes of the Dormition Cathedral under Clouds (Vladimir)»

The view from observation deck of the Old Water Tower (built in 19th century) on the rising to the skies five golden domes of the ancient Dormition (Assumption) Cathedral (1158-1161, 1185-1189) that very strikingly placed on a pedestal of a highest hill, dominating the ancient Russian city of Vladimir. The building was conceived as a cathedral and its exalted function was reflected in its bold height – thirty-two meters, four more than St. Sophia’s in Kiev. From the time of Grand Prince Andrey Bogolubsky the this cathedral became the church where all princes of ancient Rus (Russia) were crowned, both when Vladimir was the Russian capital from 1169 to the middle of the 14th century and then for some time after the political capital was moved to Moscow.

Photo #100 taken on September 01, 2014 in Vladimir city during long distance countryside tour of the Golden Ring of Russia towns with my Dear clients from Bolivia, Alejandro and Federico Roman.

Monument to Hero-City Odessa in the Alexander Garden in Snowfall

Memorial monument to Odessa at the Alley of hero cities and cities of military glory nbear the Kremlin wall in the Alexander Garden in heavy snowfall in Moscow in February month. The name of the city-hero carved on a block made of dark red porphyry and the Gold Star medal is depicted.