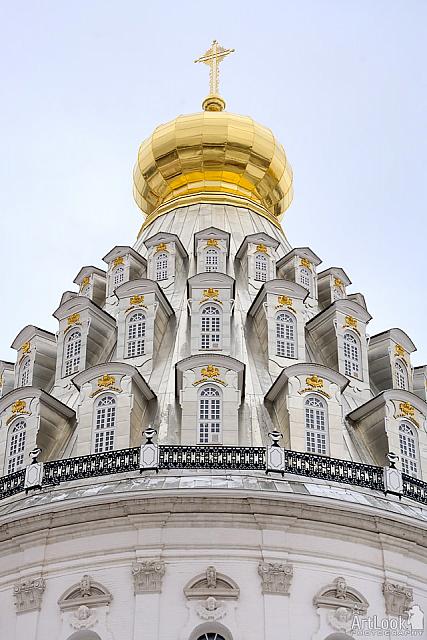 The magnificent cupola (dome) of Resurrection Cathedral, the main cathedral of the , was recently re-opened after completion of its restoration.

The Resurrection Cathedral was built 1658-1685 as a similarity of a church of the Holy Sepulcher in Jerusalem. It is the one of most grandiose buildings of 17th century Russian architecture. The model of the cathedral was brought to Russia by the Greek Patriarch Paisy in 1649.

At the end of November - beginning of December 1941 the German–Fascist invaders were able shortly to take Istra town located 50 km West from Moscow city. With regret to inform, in December 10 1941, Nazi special troops (sappers) blew all towers and temples of the great Voskresenskiy (Resurrection) monastery of New Jerusalem, leaving the Church of the Resurrection and most of the other structures in ruins.

The great restoration of the famous monastery located 40 km West from was started in 2009 and will be completed according to their schedule in summer 2016.