Photo Gallery From Russia with Love
Moscow is famous of its numerous domes of nice orthodox churches. They are magnificent, they are unforgettable. They can be seen from everywhere. Church domes can tell a lot about the cathedral to those who can understand their language. The amount of the domes can tell to everybody for whose glory the church was built. For example, the church of one single dome is devoted to the God. Two domes symbolize the duality of the Jesus Christ, the human and the son of the God. It is not difficult to understand, that three domes mean the unity of Father Son and Holy Spirit. If the church has seven domes the architecture wanted to show his devotion of the seven virtues. The color of the domes means a lot too. The golden domes symbolize the glory of the Jesus Christ. The green domes have churches built in the faith of the Blessed Trinity. To pray to holy Mother of God just chose the church with blue domes covered with golden stars. Even the shape of the dome says its own story. If you see the church with the dome looks like a helmet, be sure it was built to glorify the victory of the forces of light over darkness. The domes which look like the candle flame remember us that our soles are rush to reach the height of the spirit.
Last Next First Previous Photos 1 - 15 of 36 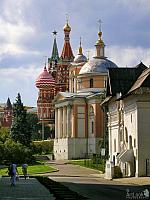 Zaryadye Cityscapes – Walking in the oldest district of Moscow

View from hotel Rossiya (Russia) in Zaryadye on architectural ensemble of buildings, towers and churches located on Varvarka Street and Red Square. After construction of enormous hotel Rossiya in 1964-1967 with 3,200 rooms and 245 half suites, just few buildings survived in one of the capital’s oldest district Zaryadye, basically on the main business street Varvarka.