The Monument to Catherine the Great in Sevastopol 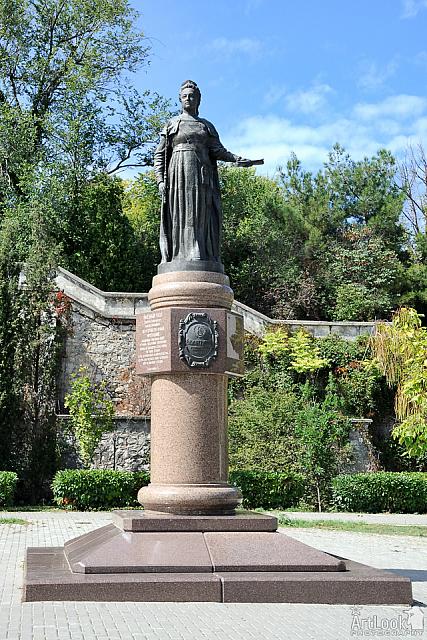 «The Monument to Catherine the Great in Sevastopol»

Sevastopol is widely known as the city of Russian Sailors and Russian Glory. It was founded in 1784 by Catherine the Great and intended to confirm the final conquest of the Russian Empire on the Black Sea.

Located in the center of the city in 5 walk from Nakhimov Square, the monument to Catherine the Second (Catherine the Great) is set in the beginning of Lenin Street, next to the building of city administration, right the opposite to the Black Sea Fleet museum.

The monument is the latest work of a well-known Sevastopol’s sculptor Stanislav Chizh. The empress is portrayed with a scroll in her hand, symbolizing the order about foundation of Sevastopol. The monument was erected in 2008 on charity funds by 225th anniversary of Sevastopol.

Yekaterina Alexeevna or Catherine II, also known as Catherine the Great (Russian: Екатерина II Великая, Yekaterina II Velikaya; German: Katharina die Gro?e) was the most renowned and the longest-ruling female leader of Russia, reigning from 1762 until her death in 1796 at the age of 67. Her reign was called Russia's golden age. She was born in 1729 Stettin, Pomerania, Prussia as Sophie Friederike Auguste von Anhalt-Zerbst-Dornburg, and came to power following a coup d'?tat and the assassination of her husband, Peter III, at the end of the Seven Years' War. Russia was revitalized under her reign, growing larger and stronger than ever and becoming recognized as one of the great powers of Europe.

On the Festive Nikolskaya Street at GUM Building

Portrait of my Dear clients from Iran, Mozhgan and Siamak, at Nikolskaya street illuminated with festive garlands during Moscow evening photoshoot celebrating in Russia their 2nd wedding anniversary. The building at the right is the famous GUM shopping center decorated with colorful flowers in a summer season.