Autumn Scene in the park near St. Vladimir cathedral in Sevastopol 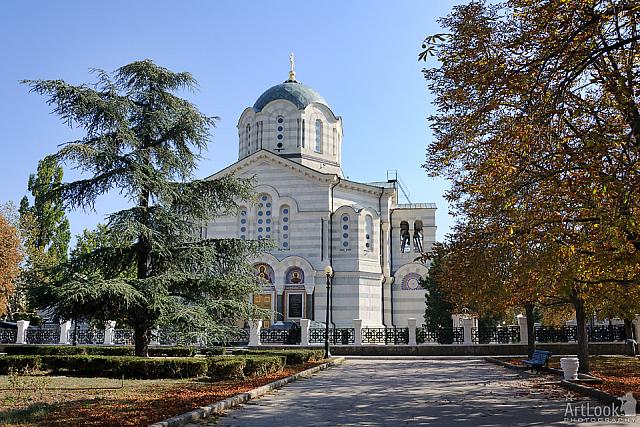 «Autumn Scene in the park near St. Vladimir cathedral in Sevastopol»

In central part of city Sevastopol near Suvorova street is located a small park on the Central Hill (more than 30 meters above level of Black Sea). It is historical center of the city surrounded with its main streets. In 1888, the majestic Vladimirsky Sobor (St. Vladimir cathedral) was constructed on the hill in Neo-Byzantine style of architecture. The church designed by Academician A.A. Avdeyev became the burial place of the famous Russian Admirals, Lazarev and three of his disciples (Vladimir Kornilov, Vladimir Istomin and Pavel Nakhimov), who died during the siege of Sevastopol by British and French troops in 1854–1855.

Church of St. John the Baptist

The Christian Orthodox Church of St John the Baptist is located in the city center of Kerch, Crimea, at the foot of the Mitridatskaya steps (there are 432 steps), which rises to the Mitridat Hill where there are a series of ancient sites. Built in the Byzantine architectural style in 717 year AD, it is one of the oldest Christian churches in Eastern Europe.