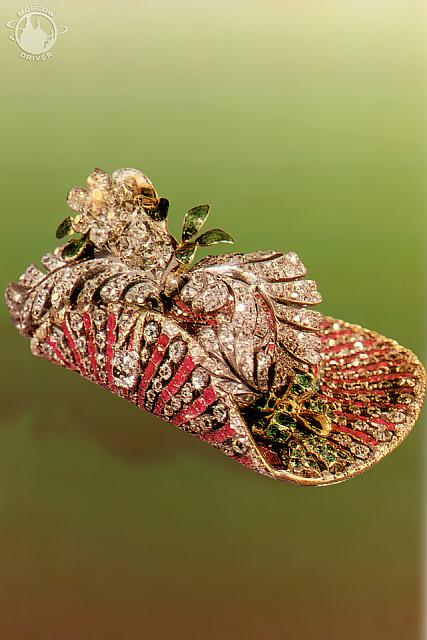 Vogue magazines emerged in Russia only at the end of the XVIII century. Before that time the court women of fashion used small mannequins to choose a pattern. These small doll mannequins were known under the name 'pandora'. Most likely it is men who gave them this particular name. According to the ancient Greek myth gods created Pandora to take revenge of people who had made them angry. Hephaestus moulded her mixing up clay with water. Athene dressed her in a silver outfit and crowned with a golden wreath. In accordance with the plot of Zeus the girl was meant to bring misfortune, temptation and bankruptcy to people. So the evil trick of Zeus worked. Fancy ball dresses were extremely expensive in the XVIII century and 'pandora' dolls meant not less temptations and bankruptcy to fathers and husbands than her progenitress did. The hat proves that not only finished goods but also patterns for miniature mannequins were very dear. The miniature smart hat measuring 8 x 6.5 x 4 cm (3,1 x 2,5 x 1,5 in) was made in 1770s. It consists of alternating stripes of white and red color the white ones are made of diamonds while the latter ones were laid out in rubies. The laurel wreath over the cocked brims is made of diamonds and partly enameled gold. The richness of the colour is enhanced by a splendid briolette against the branch. A lavish bow doesn't fail to catch your attention. This doll hat is rightly considered to be an outstanding piece of jewellery and is solicitously kept in the collection of the Diamond Fund of Russia .

Portrait near fountain in GUM