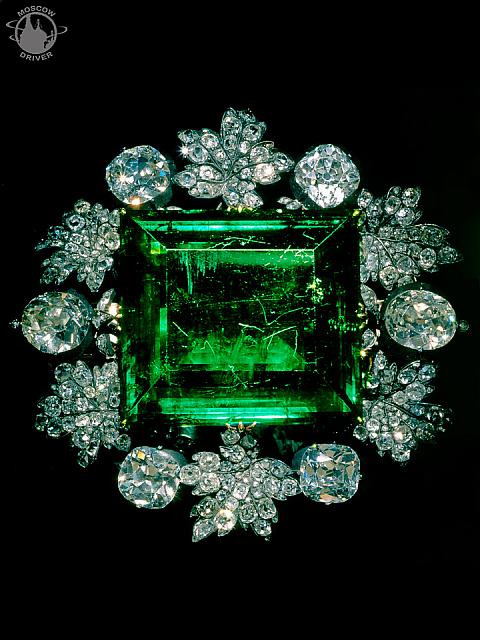 Features: absolutely pure and transparent huge square emerald weighting 136.25 carats (27,25 grams) has deep color and nice calms stasis; the brooch has diamond rim of grape leaves and large solitaires
Origin: the remarkable gemstone was found in 16-17 century in the distant Colombia; diamond mount of the brooch was made in 19th century

In the nineteenth century there was a fashion for large brooches, which were used to fasten big shawls also popular at the time. The Emerald Brooch is splendid example of the most widespread decoration of this period. It is adorned with a historic stone from the collection, the unique Columbian Emerald weighing 136.25 carats (27,25 grams) and table cut to 3.6 x 3.25 cm (1,4 x 1,27 in). This remarkable gemstone, which in earlier times was called a smaragd and revered as the stone of life, spring and wisdom, is remarkable for its deep shade of green and pure, even colouring. As we know, a characteristic feature of emeralds is the presence of flaws. There is an old saying that an emerald without flaws is unattainable perfection. This is particularly true of large stones. The emerald in the exhibition has almost no flaws, and its six inclusions are so small as to be invisible to the naked eye. At a certain angle one can see scratches on the surface of the table, but they merely serve as evidence of the stone's great age, although there are no documents or legends about its past history. Academician Fersman attempted to give an approximate idea of its origin. In his reflections on this unique stone, he wrote: "It was probably found in the Middle Ages, the period of the discovery of America, and kept in one of the sacred temples of Columbia, then taken to India after the bloody struggle of the Portuguese. There it merged in with other gems in this country, until it reached the European market by the same mysterious ways in which the East so often sent valuables from its harems and treasuries to the counters of Western merchants." Fersman believed the stone's masterly cutting was the work of Indian masters. Emeralds have always been greatly valued by experts and gemstone lovers all over the world. There are many large specimens in national and private collections. Some exceed our stone in size and weight, but the Diamond Fund emerald is unique in its purity, beauty and deep rich green. The diamond mount in the form of a garland of stylized vine leaves alternating with big round brilliants was made in the second quarter of the nineteenth century.

Festive view of illuminated Church of St. George (Intercession of the Most Holy Theotokos) on Pskov Hill on Varvarka street decorated with New Year light installations in twilight during winter holidays.