Spectacular View from a Corner of the Faceted Palace 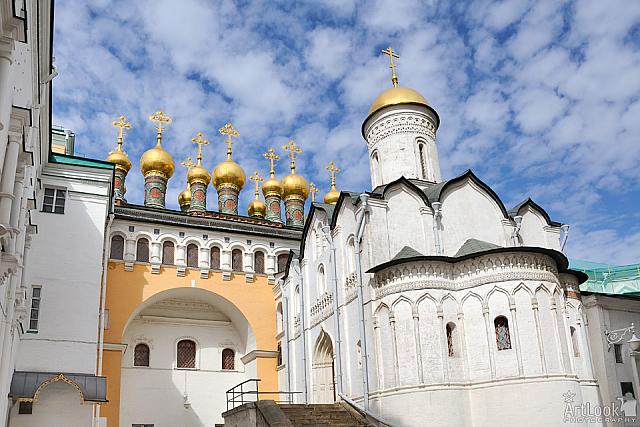 «Spectacular View from a Corner of the Faceted Palace»

Amazing gilded domes and crosses of Terem Churches and a Church of the Deposition of the Virgin's Robe, shining on the sun from the corner of Faceted Palace (at the left on this picture). These beautiful domes impress all visitors of the Moscow Kremlin, and everybody tries to take a picture of these amazing bulbous cupolas, especially if the weather treats the photographer with a sunny weather and a beautiful sky with puffy, white clouds.

The small one-dome church at the right side of this picture used to be the house temple of the Metropolitans of Moscow and Russian Patriarchs for many years. Eleven drums with gilded onion-shaped cupolas belong to several court churches in Terem Palace, the residence for Tsars and their family members, built in 16th-17th centuries.

Photo #073 taken on May 31, 2014 during tour of Moscow Kremlin with my Dear clients from Singapore, Min Chee Liew and Phui Peck Thong.