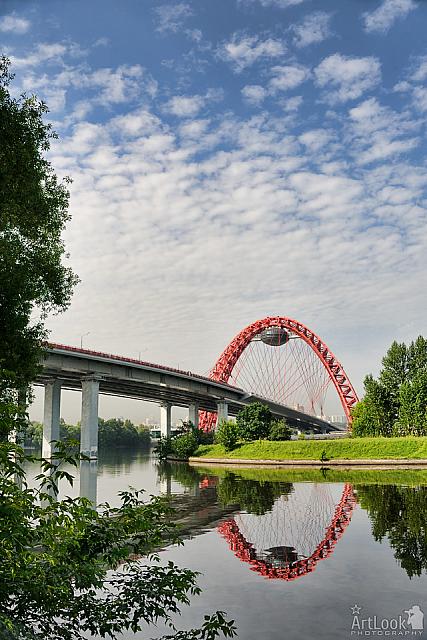 The special technical features of Zhivopisny Most is that its main pylon is a 105-meter high arch across the river, carrying the weight of the deck through 78 cables. It is the highest bridge of this type in Europe.

During the construction of the bridge, on the request of Yu. Luzhkov a glass-covered oval-shaped restaurant was added to the project. However, after it was opened there was no demand for it since it was very hard to reach it, and it was closed down due to large costs of maintenance.

On this picture the arch of the birdge reminds of magic gates reflecting in the water.

View from park Zaryadye on the historic clock on the Spasskaya Tower of Moscow Kremlin and amazing onion domes with crosses of St. Basil’s Cathedral on Red Square covered snow in the winter season. It is the architectural ensemble of the most famous Moscow’s landmarks.