Statue of Student with Book at the Main Entrance of MGU 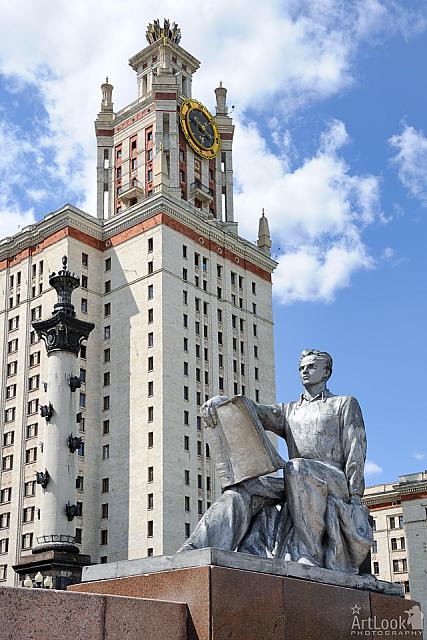 «Statue of Student with Book at the Main Entrance of MGU»

View of the sculpture titled “Science,” of a young man resting a large book on his knee, at the main entrance to Moscow State University (MGU). In the background is the right tower of the building, which is topped by a giant thermometer five meters in diameter. The statue by well-known Soviet architect and sculptor Vera Mukhina - creator of the famous Moscow statue, "Rabochy I Kolkhoznitsa" ("The Worker and the Collective Farm Woman") - was completed in the early 1950s and symbolizes the “Eternal Youth of Science.”

Photo #291 taken on June 12, 2015 during photo tour of Seven Stalinist Skyscrapers with my dear client from Belgium, Bert Nys.

Church of St. George at Sunset

Beautiful golden-domed Orthodox Church of Saint George the Victorious on Poklonnaya Hill in Victory Park at sunset in the spring season. The church was built in Neo-Russian style of architecture in 1995 to mark the 50th anniversary of the Great Victory of Soviet Union in the Great Patriotic War 1941-1945.