Photo Gallery Moscow - The Capital of Russia
Moscow architecture - famous buildings and structures of the capital of Russia.
Last Next First Previous Photos 1 - 15 of 25 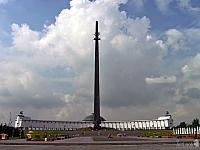