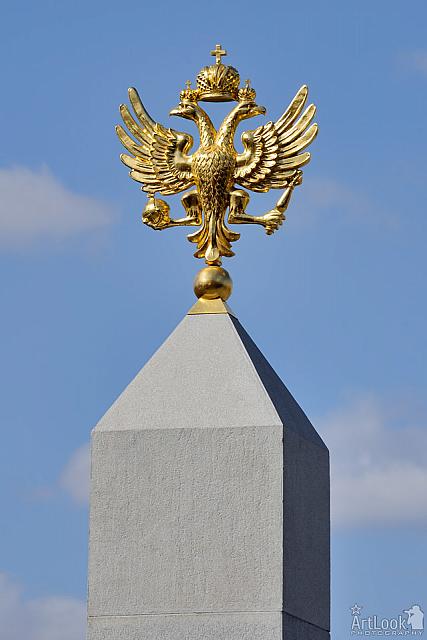 The symbol of tsarist Russia, which has its origins in Byzantium, tops the restored column of the Romanovs in Alexander Garden near the western wall of Moscow Kremlin. The Russian imperial two-headed eagle was established as an official emblem of the state by Ivan III The Great at the end of the 15th century, and it was featured as a design motif in the regalia of the Russian Imperial Court until the fall of the monarchy in 1917. The symbol was adopted once again on November 30, 1993, at the initiative of President Boris Yeltsin.

Featured in many cultures around the world, including Ancient Persia, the Holy Roman Empire, the Byzantine Empire, the Venetian Republic, and Scandinavia, the double-headed eagle had been the symbol of the monarchy of Russia for more than four hundred years, and is most strongly associated with Russia again in the present time.

See another picture: Top of Romanovsky Obelisk at Sunset.

My Dear client from Lebanon, Ranwa Sawaya, are standing in middle of Red Square with the Lenin’s Tomb (Mausoleum) in background. The wooden tomb of Mausoleum was erected here in January 1924 after death of the leader of Soviet Revolution, Vladimir Lenin.