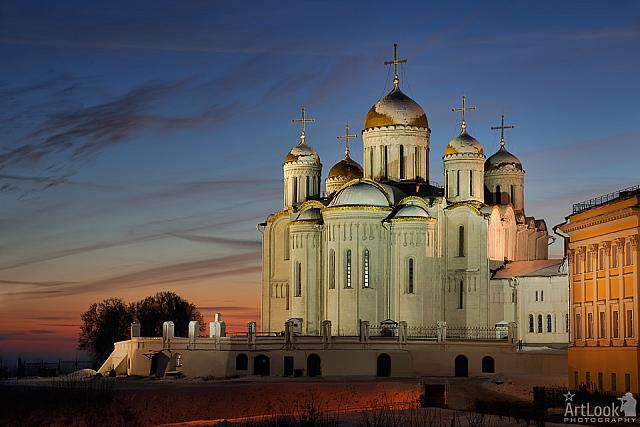 The beautiful white-stone Cathedral of Dormition (Assumption) of the Mother God for several centuries served as the chief place of worship in Vladimir, the new capital of Medieval Rus (Russia) after Kiev. It was built by the Grand Prince Andrey Bogolubsky in 1158-1161 on a pedestal of a high hill, dominating the city and surrounding area. Originally the cathedral was crowned by a single golden dome (cupola), but after the fire, in 1189, the church was reconstructed by Prince Vsevolod’s master-builders who enclosed the charred wall with a two-tier gallery topped with four smaller domes.

It is a classic work of early Russian white-stone architecture that has been included into the UNESCO's World Heritage List in 1991. The Dormition cathedral in Vladimir served as a model for the Bolognese architect Aristotle Fiorovanti when he created the cathedral of the same name in the Moscow Kremlin.

Leaning Light Windows with Chandelier in Old Arbat at Twilight

New year decorations at the beginning of the pedestrian Old Arbat street in the historical center of Moscow city in frosty morning twilight.