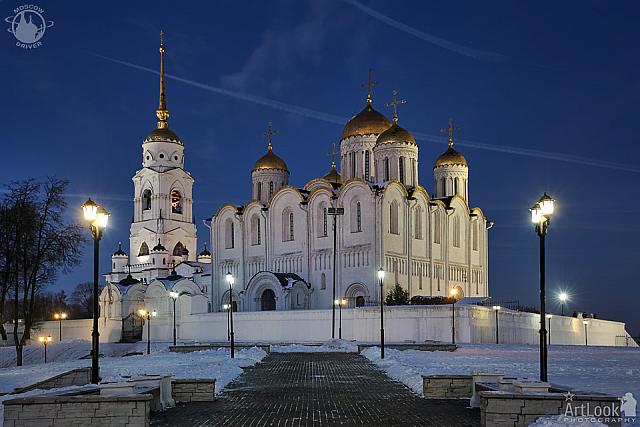 The view between street lights in the park of Pushkin (from the side of the monument to price Vladimir on the main historical ensemble of Vladimir city, the majestic golden domed Dormition Cathedral (Assumption Cathedral) with bell tower, at winter twilight.

Built of white limestone in 1158-1161 and reconstructed in 1185-1189, the ancient cathedral includes a 56-meter (184 feet) bell tower with a tall gilded spire that was added in 1810. The magnificent five-domed cathedral was designed as a sepulcher of grand princes and was dedicated to the holy icon of Vladimir Theotokos, which had been brought as a gift to the city by Andrew the Pious. The site is not far from a monument to the Russian Prince Vladimir the Saint in Vladimir city.