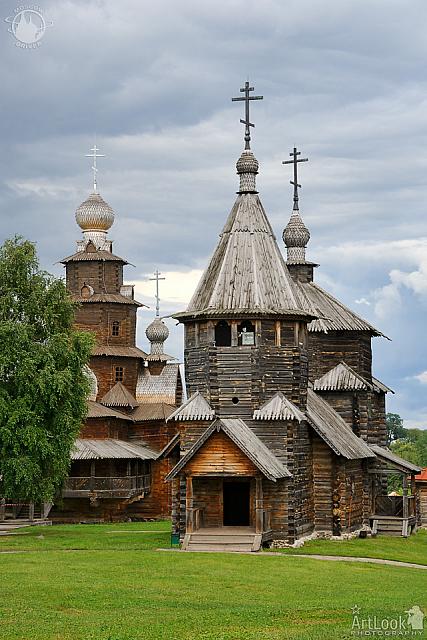 These two wooden eighteenth-century churches are the heart of the Suzdal Museum of Wooden Architecture and Peasants' Life, catching the eye of any visitor with their simple yet elegant beauty. The picture was taken before starting rain when gray dark clouds literally hanged over the churches.

On the left side of the picture you can see Transfiguration Church. This church was built in 1756 in Kozlyatyevo village. Then in 1967-1968, it was moved to its new location – Suzdal’s Museum of Wooden Architecture and Peasant Life. Recently the roof of the church had to be restored since it was destroyed by the fire after it was struck by the lighting on July 21, 2011.

The building on the right side of the picture is Church of the Resurrection of Christ. It was built a bit later than its companion – in 1776. It was moved to Suzdal in the 1970s.

Photo #282 taken on July 25, 2013 during long distance countryside tour to Suzdal and Vladimir with my dear repeat client from Canada, Ana Miceta

Beautiful decorations of the sky with balls of flowers suspended above the street Bolshaya Dmitrovka during the festival “Moscow Spring” at early morning.