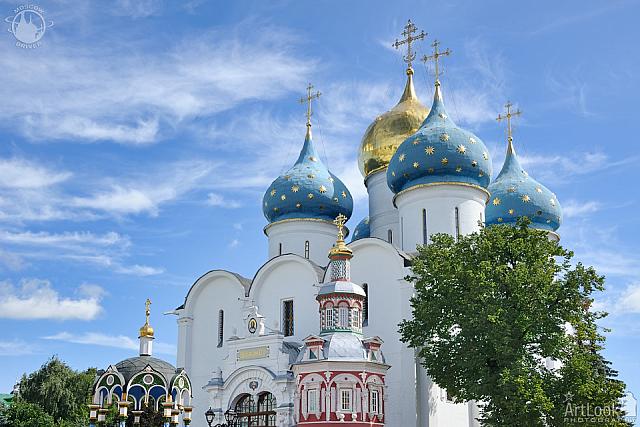 The grand five-domed cathedral of Assumption (Dormition) of Our Lady was built in brick on money commissioned by Ivan IV The Terrible on the grounds of Holy Trinity St. Sergius Lavra (Monastery) in Sergiev Posad in 1559-1585. The magnificent church, that was erected to commemorate successful military campaign of the first Russian Tsar against Tatars and taken Kazan-Khanate.The building repeats in its basic proportions and constructions the Cathedral of the Dormition in the Moscow Kremlin that was the central cathedral of the Orthodox Church and was based, in turn, on the forms of the most ancient and highly prized Cathedral of the Dormition (Assumption) in Vladimir city.

The pink Chapel over the Well boasts its rich Muscovite Baroque style of architecture in front of Assumption Cathedral. It was built at the end of 17th century on the site where during the reconstruction of the cathedral of Dormition in the year of 1644 was discovered the holy spring. The top of 19th-century Canopy over the Cross is at the left on the picture.

Photo #031 taken on July 17, 2016 in Sergiyev Posad during a long-distance countryside tour to the towns of the Golden Ring of Russia with my dear clients from the USA, Andrew and Karen Green.

Launching Aerostat "Time of the First" 2017