The Resurrection of Jesus Christ. Frescoes of Dormition Cathedral 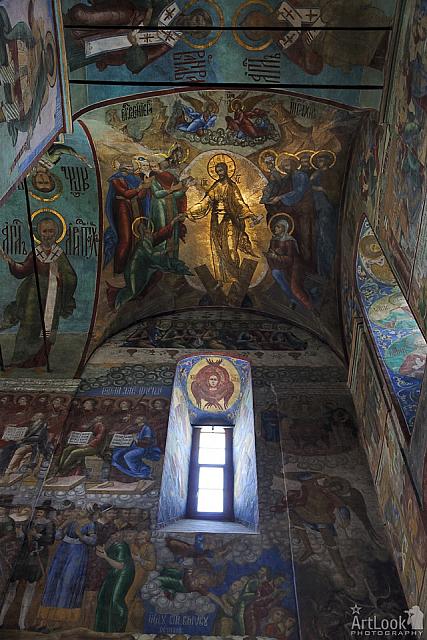 «The Resurrection of Jesus Christ. Frescoes of Dormition Cathedral»

Seventieth century frescoes on the ceilings and walls of the Dormition (Assumption) Cathedral of Holy Trinity – St. Sergius Lavra in Sergiyev Posad. Highlighted with sun beams from the narrow windows of the church, the gilded Image of Jesus the Christ portrayed in the moment of his resurrection is in the center of the composition.

The magnificent five-domed cathedral of Dormition of Our Lady was built in brick on money commissioned by Ivan IV The Terrible on the grounds of the top-ranked monastery in Sergiev Posad in 1559-1585 to commemorate successful military campaign of the first Russian Tsar against Tatars and taken Kazan-Khanate.

The interior of the church looks festive and majestic due to bright light and fine frescoes on the walls, vaults and supporting pillars. The frescoes were produced by 35 Yaroslavl and local Trinity painters, supervised by Dmitry Plekhanov, 99 years after the construction of the Assumption Cathedral.

Photo #284 taken on May 25, 2016 during one-day countryside tour to Sergiyev Posad with my dear clients from USA, Sergei Groshev

3D projection mapping on the most significant attraction of Kolomenskoye Estate built in the 16th century, Ascension Church in the background of moonlight during Moscow International Festival “Circle of Light”.