Monument to the Leaders of the "Big Three" in Livadia 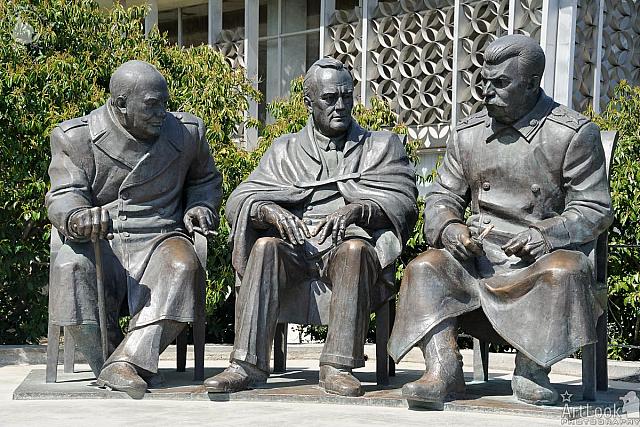 The bronze composition dedicated to the 70th anniversary of the meeting of the leaders of the anti-Hitler coalition countries, Joseph Stalin, Franklin Roosevelt and Winston Churchill, weighing about 10 tons, was created by prominent Russian sculptor and architect Zurab Tsereteli.

The monument was established on February 5, 2015, with the support of the Minister of Culture of the Republic of Crimea - Novoselskaya A.V. and the Head of Administration of Yalta - Rostenko A.O.

The "Big Three" - British Prime Minister Winston Churchill, US President Franklin Roosevelt and Chairman of the Council of People's Commissars of the USSR Joseph Stalin - met in the royal palace in Livadia from February 4 to 11, 1945 at the Yalta Conference in Crimea. It was the World War II meeting of the allied leaders for the purpose of discussing Europe's postwar reorganization.

Nice picture framed with trees of a red colored Russian car, the old model of Lada (still in very good shape), parked in front of a cute yellow wooden house #26 on Zaprudny Lane.