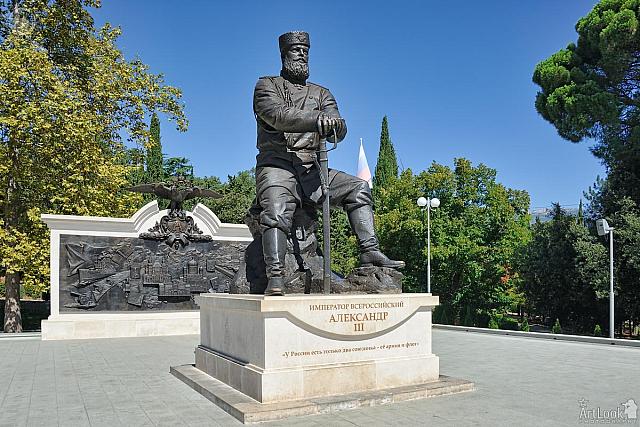 Angle view on the monument to Alexander III, emperor of Russia from 1881 to 1894, the Russian Tsar who strove to maintain peace in Europe, which earned him the moniker of "Peacemaker", in the park of the Livadia Palace, outskirts of Yalta, Crimea. President of Russia Vladimir Putin participated in the unveiling ceremony for the monument on November 18, 2017. The impressive four-meter-tall bronze monument was designed by sculptor Andrei Kovalchuk, head of the Artists’ Union, People’s Artist of Russia, and created at a plant in the Urals. Alexander III is presented as sitting on a tree stump, dressed in military uniform and resting on his sword, with a stele behind him topped with a double-headed eagle. An inscription at the bottom of the monument repeats his alleged saying “Russia has only two allies: the Army and the Navy.”

Photo #021 taken on August 14, 2019 during visiting Livadia Palace with my dear clients from Hong Kong, Esther and Ricky on the 4th day of the adventure trip “Discovering Crimea in 6 Days”.

The famous canvas “The Black Sea” (Storm Breaking on the Black Sea) was created in 1881 by the most popular Russian marinist Ivan Aivazovsky (1817-1900).