Smile At the Fountain of Friendship of Nations 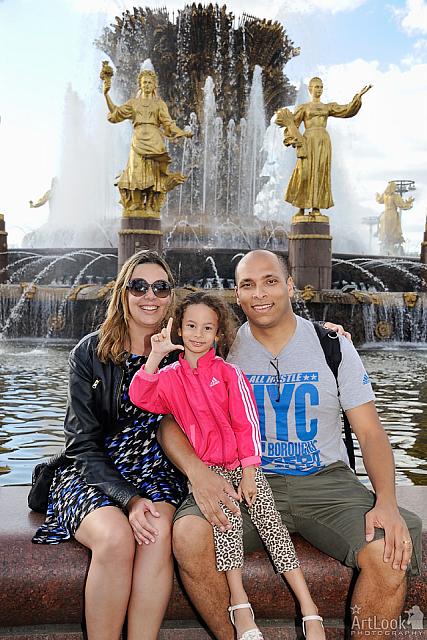 «Smile At the Fountain of Friendship of Nations»

My Dear clients from Brazil, Tatiane, Pedro and their little daughter Leticia, are sitting at the famous fountain "Frienship of Nations", area of VDNKh exhibition, after countryside tour to Sergiyev Posad.

The fountain was created on the grounds of All-Union Exhibition Center in 1954 and became the symbol which reflects the celebration and high spirits associated with the victory in the WWII, embodying the national dream of prosperity in the whole world, symbol of the friendship of nations. Sixteen gilded statues of women are standing around Around the golden wheat sheaf in the middle of the composition. The gilded statues symbolize the republics of the Soviet Union before the 1956. Behind the family there statues of Ukraine (at the left) and Russia (at the right) standing together. It is pity to see that some people in Ukraine forgot who they are, their history and background trying to rewrite it.