In the Spiritual Center of Russian Orthodoxy 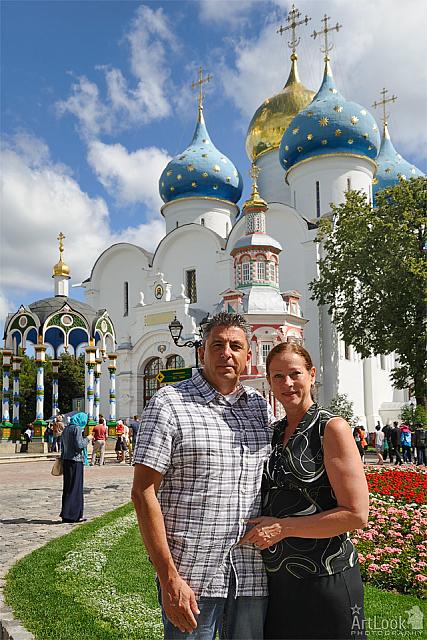 «In the Spiritual Center of Russian Orthodoxy»

My Dear clients from USA, Simon and Sherri, are standing on the Cathedral Square in Holy Trinity St. Sergius lavra, the top rank monastery in Sergiyev Posad (70 km North from Moscow) considered as Russian Jerusalem. It is associated with Russia’s most brilliant spiritual leader St. Sergius of Radonezh, the saint of the Orthodox Church revered in Russia for many centuries. The beautiful architectural ensemble with majestic five-domed Assumption Cathedral (1559-85) built on the model of its namesake in Moscow Kremlin, the Chapel-over-the Well (end of 17th century) and the Canopy over the Cross (19th century) is on background of this picture. All area of the monastery is nicely decorated with flowers.

Hotel Ukraina (Ukraine) is one the famous seven buildings in Moscow that are known as “Stalinist skyscrapers” or “Seven Sisters” that were laid in 1947 to mark the 800th anniversary of Moscow. Their special, highly distinguished style characterizes to a large degree the appearance of downtown Moscow serving as a striking architectural landmark of Russia’s capital.