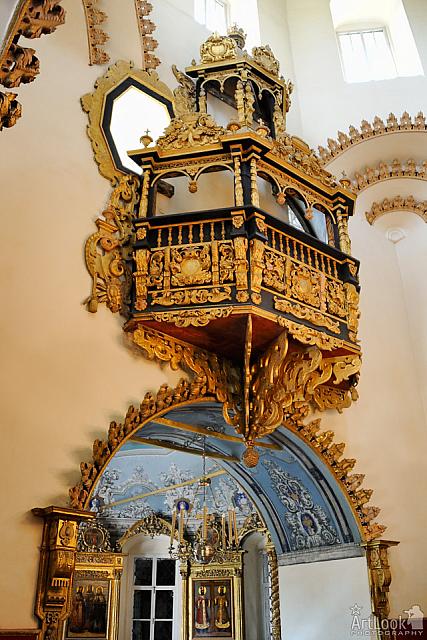 Interior of the upper church of Intercession Cathedral in Fili dedicated to the Icon of Our Savior Not Made by Hands (Church of Veronica’s Veil), angle view on the Tsar's Pew carved in late 17th century by talented Russian craftsmen. During construction this cathedral in 1690-1693, Tsar Peter the Great himself granted to his uncle Lev Naryshkin four hundred gold coins (tchervonets) for the decoration, it was a very large sum by that time’s standards.

Situated above the passage arch, the Tsar's pew catches one's eye by its decor. This is a true piece of architecture which looks like a tiny church. Above a trihedral box there is a high tent, and above it a small, also trihedral balcony with a royal crown on top put on a little drum. Each side of the pew and balcony ends in carved pediments and cartouches, which makes the tsar’s pew still more like the upper part church itself. From below the box is supported by a bundle of beautiful corbels. Intricate bright painting in the peacock eye style and expensive fabrics that originally decorated the pew went perfectly well with its fairy-tale look. Located on the western wall, opposite the iconostasis, where in ancient Russian churches the gallery (place for the princely family) used to be, the pew was intended for the owner of the estate and his royal guests.

Maps of St. Basil's Cathedral with keys of its 10 chapels and belfry. Description of the cathedral chapels with their Altar Holidays and Significance (all dates given according to the new calendar):